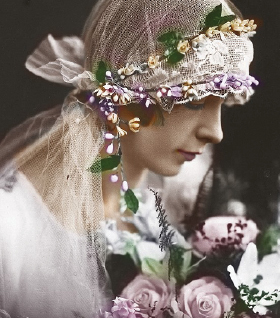 Following on from the previous post ‘Advice for the Bride-to-be’, one of the social skills a new wife had to master, was the art of paying a call. Although known as ‘morning calls’, these visits were actually made in the afternoon, at specific times depending on their purpose: ceremonial calls were paid between 3 and 4pm, semi-ceremonial between 4 and 5pm, and intimate calls between 5 – 6pm, - but never on a Sunday which was reserved for very close friends and relatives. Generally a call was limited to 15 minutes, and if other guests arrived during your visit, it was expected you would quietly excuse yourself and leave. 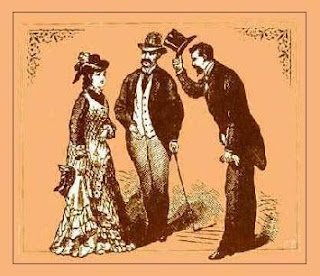 One should never call ‘on the off chance’ but on pre-set ‘at Home’ days and times, e.g. the third Friday of each month, or the second Tuesday.


If a wife was new to an area, she might get a lucky break and gain a letter of introduction from a friend to someone of prominence in the local community. These were sometimes referred to as ‘letters for soup’ because generally the person receiving the letter then invited the bearer to dinner.


A more usual way of announcing yourself into society was to leave your card. 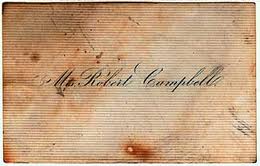 Visiting cards were invented by the French, and adopted in around 1800. It was imperative to understand the rules of calling, of which card-leaving was the first step. Those wise in the ways of society, left their card but without requesting to see the mistress of the house. Then it was up to the recipient to respond – if no card was sent in return, that was a heavy hint that there was no wish for an acquaintance to develop. The unwise presented their card and then inquired if the mistress was ‘at home.’ Since you could be physically at-home, but not socially at-home, the visitor had to be prepared for the ignominy of being turned away.
In “Eulogy’s Secret’’ (due for release November 2011), alone in London, Eulogy Foster calls on her estranged brother for help…but with no card to present, the footman assumes she is a nobody.
EXCERPT – “Eulogy’s Secret” by Grace Elliot.


A surly footman opened the door and squinted into the gloom; sounds of music and raucous laughter spilt over his shoulder.
“Yes, Miss?”
“My apologies for the late hour, but I must see Lord Devlin.” Eagerly, Eulogy pushed back the hood of her travelling cloak.
The footman raised a haughty brow.
“His Lordship is not at home.”
“But His Lordship would wish to see me… I’ve travelled a long way.”
Her head buzzed with frustration that this man stood between her and safety.
The footman’s gaze wandered disapprovingly over her plain wool cloak and battered valise.
“Your card, Miss?”
Her heart sank. “I don’t have one but I’m a close…very close, family friend.”  She neglected to add that she had yet to meet his Lordship….
“No card? Then what name do I give?”
“Miss Foster. Miss Eulogy Foster. Be sure and tell his Lordship that his late mother, Lady Devlin, knew me well.”
“Wait there, Miss Foster.” He withdrew, exuding cool disapproval, leaving her to shiver on the doorstep. 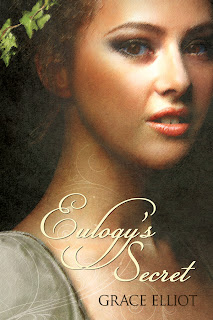