'Twas The Night Before Christmas. 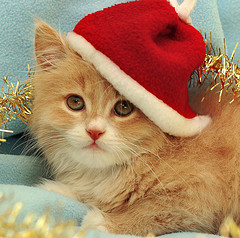 "Twas the night before Christmas, when all through the house,
Not a creature was stirring, not even a mouse."
Clement Clark Moore (1779 - 1863)

Welcome!
At this stop on the Virtual Advent Tour, to get you in the Christmas spirit I'm posting about some of the traditions surrounding Christmas Eve.
In modern times it seems Christmas decorations go up as soon as the Halloween ones come down, but this would have been unheard of for our great-grandparents. In their day it was considered unlucky to decorate the house before Christmas Eve and a busy time was had by all putting up greenery and trimming the tree, buying in fresh food (there were no fridges or freezers!) and visiting church. Holly, mistletoe and pine were the most popular decortaions.The Victorians are widely attributed with the introduction of kissing under the mistletoe, but in fact the tradition dates back to the 16th century. An interesting but little known twist to the mistletoe tradition is:
"… once kissed under the mistletoe should be burnt, or those couples who kissed beneath it would be foes for the rest of the year." 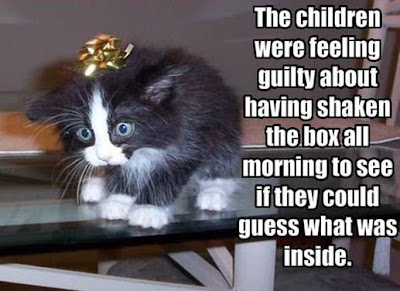 It was said that any girl NOT kissed under the mistletoe would not be kissed in the forthcoming year, and to put mistletoe under a young woman's pillow would cause her to dream of her future husband.
Incidentally, any holly brought into the house at any time other than Christmas was believed to result in death.
For farmers, Christmas Eve was a time to give extra food to the animals - not just as a treat, but in the hope that they needed less attention on Christmas day itself.
In the 18th and 19th centuries, Christmas eve was also a popular time for traditional 'performers' to visit, such as carol singers, or sword dancers (if you lived in North East England), the Hooden Horse (a Kentish tradition) or guise dancers (a Cornish tradition) Not only were the performers likely to find people at home but they would likely be filled with good cheer, and even if no money was forthcoming, they would likely welcome strangers with food and drink. 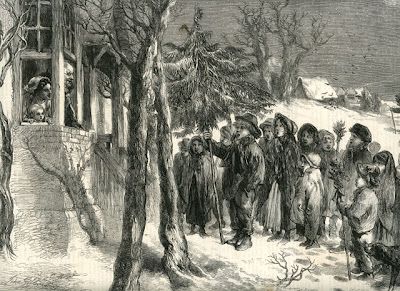 The Gentleman's Magazine of 1824 records some Christmas Eve celebrations in .
"At eight o'clock in the evening, the bells greet 'old Father Christmas' with a merry peal. The children parade the streets wth drums, trumpets, bells or…even a poker and a shovel, taken from the humble cottage fire."
Christmas Eve was also said to be a good night for an unmarried woman to divine the identity of her future husband. Apparently this good time to meddle in the dark arts because ghosts and other spirits were said to be powerless on this night. The method of doing this was recorded by Sidney Addy in 1890.
"If a girl walk backwards to a pear tree, on Christmas Eve and walk around the tree three times, she will see an image of her future husband."
And finally, at the midnight hour church bells would ring and many people would open their doors to welcome Christmas in. It was said that on the stroke of midnight cattle would kneel down in their stalls and bees hum the Old Hundreth Psalm in their hives. 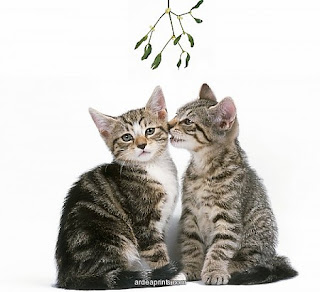 Do you have any Christmas Eve traditions - do leave a comment and share them.
Posted by Unknown at 08:25