In February I visited the rediscovered Chocolate Kitchen at Hampton Court Palace and whilst there, I took the opportunity to investigate HCP's magnificent Tudor kitchens. 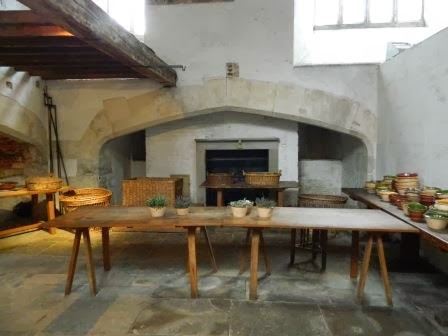 My current WIP (work in progress) is set in a Georgian kitchen (pssst, just for you - a sneak peek at the cover) and so I was keen to soak up the sounds, smells and sights of the kitchens at Hampton Court Palace.

"The usual daily consumption is 80 - 100 sheep and the sheep are very big and fat - a dozen fat beef, a dozen and a half calves, without mentioning poultry, game, deer, boars and great numbers of rabbits."
A Spanish visitor to the English Court, in 1554 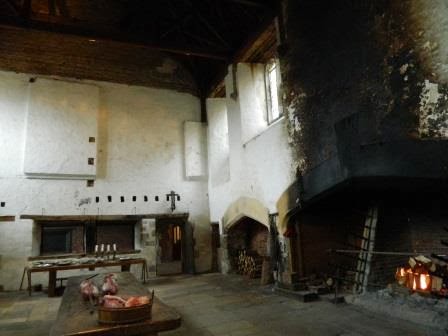 Hampton Court Palace is a place synonymous with King Henry VIII. When he held court there he was joined by a small army of courtiers who brought their servants with them - all of whom needed feeding. This involved storing and cooking huge amounts of meat, fish and vegetables, and each item of food was stored in a designated store: The Flesh Larder for meat, The Wet Larder for fish and the Dry Larder for less perishable goods. It was down to a kitchen staff of around 200 people to prepare the meals in the Great Kitchen and once cooked, the finished dishes were garnished in the Serving Place. 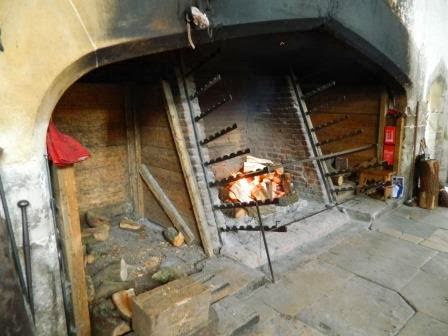 In 1526 around 600 courtiers were entitled to take their meals in the Great Hall or common dining room ( the King ate in his private apartments). Those of people of lower status such as general court servants, grooms and guards dined at 10am and 4pm, and the most senior man at the table served the food (a bit like doling out school dinners!) 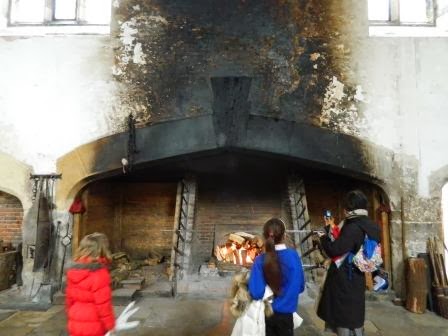 Higher status courtiers ate next door in the Great Watching Chamber, which was more akin to a restaurant with finer dishes and more variety. In addition, around 230 domestic servants were entitled to rations, but not allocated a place to eat and so most likely took their food to their work station or lodgings. 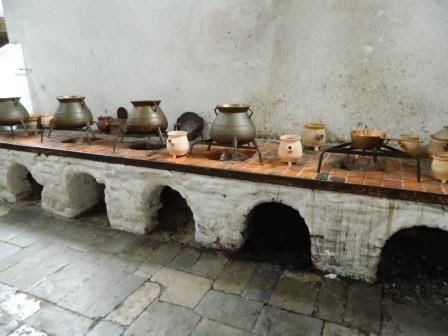 As you can imagine to prepare such quantities of food took a lot of organisation. Indeed, food production was just that, a kind of factory like process. As an example take the making of a pie: pastry cooks made the case, butchers prepared the meat filling, which was then cook by the boiling house staff. The cases were then filled and baked in the pastry ovens and cooked, sent to the servery for garnishing then taken to the diners. 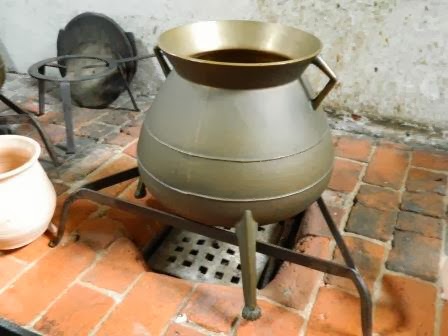 A large part of the diet was made up of meat, which was prepared in a variety of ways from roasting, boiling and stewing, to griddling (similar to barbecuing). Roasting was relatively expensive since it required a lot of fuel to heat the huge open fires, plus a man to turn the spit to make sure the meat cooked evenly. 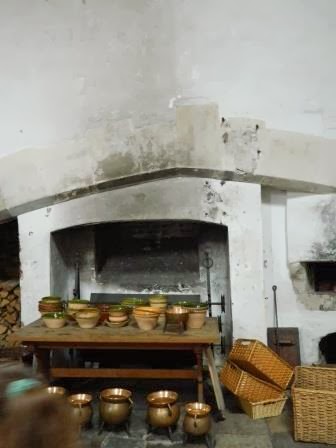 And finally, the food consumed needed to be washed down with something and this frequently took the form of beer. The average annual consumption of beer for the Tudor court was 600,000 gallons!
Posted by Unknown at 03:58