Line of Kings: The Oldest Exhibition in the World

Q: How long has the world’s oldest visitor attraction been on show?

A: An amazing 350 years – and the attraction is the Tower of London’s evocative ‘Line of Kings’ exhibition. But just in case you are thinking the exhibits might be a bit dusty by now – let me assure you that the latest incarnation of this wonderful display is anything but dull! 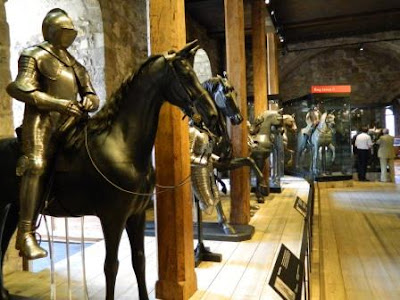 In the 17th century the aim of the attraction was to display the king’s armour and weapons, and remind subjects of the power of the crown. This latest take on historical armaments has added interest for today's visitor with a display of magnificent, life-sized wooden horses. These horses, carved in the 1690's, were designed as mounts suitable to showcase a king's armour, and in the modern day make breath-taking sculptures in their own right.
Set in the historic White Tower, the very first ‘Line of Kings’ display coincided with the restoration of the monarchy in 1660.  The exhibition of royal armour was open to the public and was more concerned with pomp than historical accuracy. For instance, William the Conqueror’s armour was exhibited - despite it being in a style not designed until several hundred years later.


Somewhat ironically, when William’s armour was removed from display in 1826 (because of historical inaccuracy), the suit was then reassigned to another nobleman! That said, it seems early visitors were not unaware of the liberties being taken with history if the account below is anything to go by:
“As we gently mov’d along and viewed the princely scarecrows, he [the guide] told us to whom each suit of armour belong originally, adding some memorandums out of history…some true some false, supplying that with invention which he wanted in memory.”
Ned Ward- visiting the Tower of London in 1699

The current ‘Line of Kings’ exhibition is now open at the Tower of London.  Armour worn by Henry VIII and Charles I (amongst other royals) is on display, but the highlight of my visit and personal favourites are the gorgeously carved wooden artefacts in the form of life-sized prancing horses. [More about the horses in my next post]

As well as those fabulous horses there is an eerie cabinet displaying the carved likenesses of kings’ heads and hands. To whet your appetite further, below is a photo of the wooden horse made to display King Henry VIII’s armour in a late 17th century display.

Entry to the Line of Kings exhibition is included as part of the entrance fee to the Tower of London.
#LineofKings
Posted by Unknown at 00:56