'Trixie' in the Tower of London.

You may have realised by now that I'm a bit of a cat addict. In today's blog I have combined my favourite things - cats and history - with the true story of Trixie and the Third Earl of Southampton in the Tower of London.
This portrait shows the long faced Earl with his beloved cat, Trixie, and over his left shoulder a picture of the Tower of London. A somewhat unusual portrait the true story behind it is fascinating.

Henry was at court in the time of the ageing Queen Elizabeth I. In fact his ancestoral home, Boughton Hall (described as the English Versaille) houses he only portrait of Elizabeth I looking old.

Unfortunately Henry was close friends with Robert Devereux, Master of the Horse and one of the Queen's favourites. However the royal attention went to Devereux's head and he became cocky, disobeying the Queen's direct orders and squandering her money. The furious Elizabeth withdrew royal patronage and with Devereux facing financial ruin he masterminded a rebellion. Rightly or wrongly Henry was named as a conspirator, arrested for treason and sent to the Tower of London to await execution.
But Wriothesley's devoted black-and-white cat, Trixie, saw him dragged from the house and followed along the London streets. Taken to the Tower, the story has it that Trixie jumped onto the roof tops and popped down an unlit chimney into his cell. Goodness only knows what a comfort she was to him, sharing his incarceration at such a terrible time, thinking he might die any day.
Happily the story ends well. Wriothesley remained in prison until Elizabeth died in 1603. The new monarch, King James I of England, pardonned him and eventually made Henry Wriothesley a Knight of the Garter. To mark this momentous event, Henry did what any decent cat lover would do - commission a portrait of him with faithful feline friend Trixie. 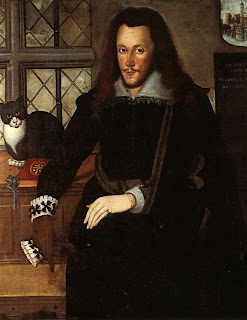 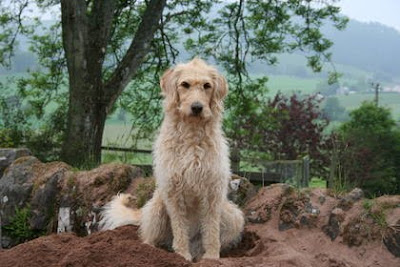 A Short History of Kitty Doors. 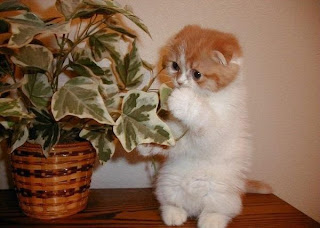 So many people enjoyed the previous post (Sir Isaac Newton and the kitty door) that I couldnt leave the subject of cat flaps without a brief look at their history.
The earliest recorded mention of a kitty door was in a medieval poem by religous writer and teacher, Hugo von Trimberg. The scourge of many a school boy, in the 1200's Von Trimberg wrote the history of 100 great latin authors. In one of his very long poems he grumbles about an Abbot, droning on interminably during a formal banquet about  'the cat window installed in the abbey gate.'

St Peter's Cathedral, Exeter.
Perhaps the oldest known cat flap is in the door of the North Tower of St Peter's Cathedral, Exeter, England. Cats were allowed to roam the grounds of this Norman cathedral to keep the rats and mice under check. Indeed on medieval scrolls there is an entry to pay wages to 'Custorbis et cato,' or 'the verger and his cat.'
And finally, my favourite kitty door from history belongs to the romantic landscape painter, J M W Turner.
Turner's works are now beyond price now and his painting 'The Fighting Temeraire' was voted Britain's greatest painting in a 2005 BBC poll, however he didnt always value his work.
'Fishing Upon Blythe Sands' depicts a scene facing Canvey Island in the Thames, exhibited in 1809, Turner offered it for sale to his patron Sir George Beaumont. Some time later it seems the painting ended up back in Turner's studio, perhaps to repair some minor damage, only to be treated with stunning disregard.
In the past decade, conservation work at Tate Britain, revealed that the picture had once been slashed, and there were paw prints on the back. Joyce Townsend, head conservator for the gallery, concluded the canvas had been propped up against a draughty window and then cut to provide an entrance/ exit for Turner's cats.
Next blog: Historical Slang - Tuesday 14th September 2010
Blog entry         - Sunday 19th September 2010.
Why not subscribe to this site so you dont miss any posts.
Posted by Unknown at 08:16 No comments: 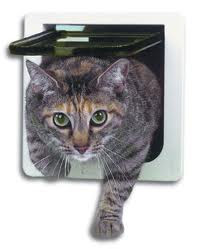 17th century astronomer, alchemist, mathematician and physicist, Sir Isaac Newton was a cat lover. When he wasnt investigating the laws of gravity, describing the universal laws of motion or discovering white light was made up of rainbow colours, Sir Isaac was a bit of a softie when it came to cats. So much so that the great scientist is attributed with inventing the kitty door, or as we call it in his native England, the cat flap.


There are two versions of how this came about. The first is that Newton suffered from crippling headaches, possibly migraines, brought on by hours peering through a telescope at the stars. To recover he locked himself in a darkened room for days on end and cut a small hole in the bottom of the door through which his landlady pushed his meals. Happily, his pet cat discovered the convenience of coming and going as she pleased and adopted it as her own special door. When the queen then had kittens, fearing the hole was a little high to be comfortable for the little ones, he cut another smaller hole, slighlty lower down!

The second story was that Newton, gazing at the stars in his darkened observatory was frequently distracted by his favourite cat scratching to get in and reached the practical solution of cutting a hole in the door and veiling it with a black velvet curtain so that no stray light got in.
Whatever the explanation a fellow of Trinity College, J M F Wright, where Newton had once lived, wrote in his memoir in 1872:
'Whether this account [Newton and the kitty door] is true of false, it is indisputably true that to this day there are in the door two plugged holes of the proper sizes for the respective eggresses of cats and kittens.'