Cats as People in the 19th Century

In earlier posts we learnt that in the 19th century dogs’ embodied masculine superiority and cats’ feminine promiscuity. The Victorian’s liked people to be neatly pigeon-holed within society and kept nicely in their place. This even extended to the images in popular culture which reinforced the message that people were happier when they accepted their proper rank. To emphasize this message, there was a fashion for vignettes of animals depicted as people, looking civilized, content, and happy because they had decided to conform to human standards.
A typical example is the work of Walter Potter, an hotelier by day and a taxidermist by night (he ran a hotel in Sussex and used his wages to finance his hobby.) He started small by stuffing birds and worked his way up to large-scale scenes depicting animals engaged in human activities.

His tableaus may seem bizarre (and even repulsive) to modern tastes but at the height of his popularity Potter’s scenes attracted 30,000 visits a year. It was the human-like qualities of the stuffed animals which made them so popular, of which perhaps one of his best known exhibits was “The Kitten’s Wedding”. (Sold in 2003 for £21,150!)
In the modern age it is entirely distasteful to think of kittens being killed to provide corpses to put on display (but before getting too irate, don’t forget the numbers of pets which are killed each year because shelters can't house them. OK we don’t display their corpses, but modern society isn’t above killing for convenience.)

It is perhaps the execution (taxidermy) we find unpleasant, rather than the images themselves. Think of Beatrix Potter (no relation to Walter), Louis Wain, and Aesop’s Fables and animals acting out human adventures becomes more engaging than repulsive.

What we also have to remember is that in the 19th century cats had a more conflicted popular image than today. Memories were long and cats were still associated with witchcraft and devilment, and thought of as dangerously independent (at a time when obedience was prized) and sexually promiscuous (scandalous and totally unacceptable). Cats were linked to behaviors which were frowned upon, such as being independent and promiscuous, and therefore seeing them ‘civilized’ in humanized vignettes made the average Victorian feel self-righteous, masterful, and triumphant.
The message in scenes such as ‘The Kittens’ Wedding” was seen and understand by the Victorians. It rather amused them to see cats standing upright like people and engaged in ‘polite society’ activities such as being guests at a wedding.

By having the kittens participate in such a human activity, it emphasized the difference between human civilized society and the behavior of cats. This amused the Victorians and made them feel superior to see animals successfully integrated (or redeemed from their base nature) in this way. Clearly, if you wanted to be accepted in the 19th century this meant conforming – no quarter given to individuality and instinct, especially if you were a cat.
Posted by Unknown at 02:21 No comments:

How Cats were Used to Discredit the Suffragettes

In earlier posts we saw how the Victorian’s viewed pet cats as overtly female - and this wasn’t a good thing. For a start, the Victorian’s used the link in a negative way by implying both cats and women were promiscuous with a natural inclination to low morals, and therefore in need of a firm male hand for their own good.

The independent nature of cats was another negative point against them. A good wife and mother was obedient to her husband, and her purpose in life was to please her husband (qualities more associated with dogs than cats).
Therefore what better way to discredit the growing women’s suffrage movement than to use propaganda images of cats? Linking women to cats in such an obvious way sounded a warning shot across the bows of early female emancipation, subtly linking independence with promiscuity, and making the former seem less desirable.

In the mid to late 19th century women fought for the right to vote in public elections. Prior to this they had no political rights and were not allowed to vote in elections. This was because husband’s looked after their women, freeing them from the need to worry about political matters so they could concentrate on rearing children and keeping their husbands happy.

However, since the industrial revolution many women now worked full-time, and the inequality of their lives became increasingly difficult to ignore. Incensed by their lack of rights, women organized themselves into groups to campaign for the right to vote. As you can imagine, their menfolk were less than thrilled and felt threatened by their women wanting to be more independent.
In the 19th century, women Suffragists worked towards 'The Cause', which was a general movement to improve women's rights. Originally apolitical, as time passed the idea of 'Votes for Women' took shape and became a focal point. At first the suffragists campaigned using entirely peaceful means, but by the early 1900s a breakaway movement led by Emmeline Pankhurst became impatient with the slow progress and became increasingly militant.

By 1912 their motto was “Deeds not words” and these new suffragettes were prepared to go on hunger strike and use violence to draw attention to their cause. All of which left male politicians with the problem of how to handle this political insurrection. One tactic was to discredit the suffragettes, and for that they used images of cats.

Postcards were circulated showing images of hissing, spitting cats, sending a message that femininity had gone terribly wrong. Other images, showing an angry cat holding a placard saying “Down with the Tom Cats”, which implied men had better watch out if women got the vote.

Another image showed a fat, ugly cat dressed in a suffragette’s sash, lecturing a room full of toys. The message being that the cat is self-important and engaging in a childish fantasy.
By 1914 the suffragettes learnt to fight fire with fire. They created the powerful “Cat and mouse” poster, in response to the Prisoner’s Temporary Discharge Act (April 1913)-also known as the “Cat and mouse” act. The government used this law to release women on hunger strike from prison, only to have them re-arrested once they had gained weight and health back at home.

The “cat and mouse” poster reversed traditional roles, and had men play the part of a cold-blooded killer (the cat) preying upon the defenseless mouse (the woman). As a propaganda poster it made a huge impact, largely because it reversed the imagery associated with men and women. 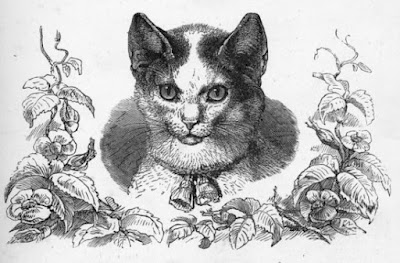 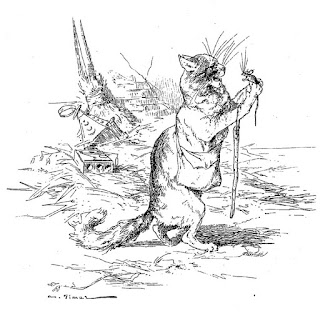 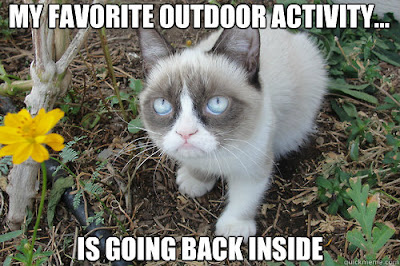 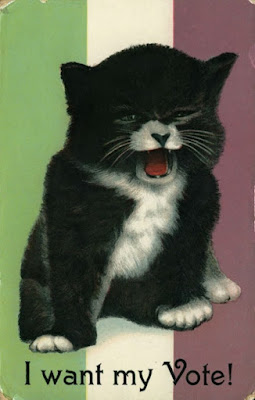