Saint Julian of Norwich and her Cat

Last week’s post posed the question: Who is the patron saint of cats? One visitor to the blog, Susan Lester, left an intriguing comment that needed further investigation. Susan mentioned Saint Julian of Norwich as being a contender for the official protector of felines. I’d never heard of Saint Julian, so I decided to find out more.

Indeed, Saint Julian is strongly linked to cats (although not named as their patron saint), most especially because her sole companion was feline. But I jump ahead, let’s start at the beginning and find out who Julian was, along with where and when she lived.
Julian lived in the 14th century, at a time when the Black Death was ravaging England. Harvests failed, the people were poor and starving, whilst taxes were high. The climax of this was a young King Richard II was on the throne, and the Peasant’s Revolt of 1381. A poll tax was levied to pay for the Hundred Years War with France, and when officials tried to enforce payment, the peasants fought back. 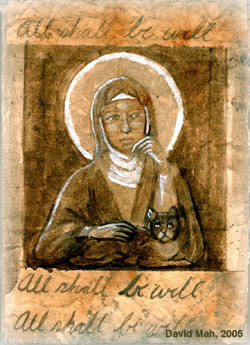 This was a time of great unrest, with Wat Tyler raising a group of fighting men to try and storm the Tower of London. In the midst of the social distress, lack of food, and risk of the plague they were dark times indeed. But Julian felt a calling to ‘anchor the light of God’ on earth.
Little is known about Julian’s earlier life, and our main clue is Julian’s own words where she refers to herself as a “Simple, uneducated woman.”
Julian’s mission was to represent a quiet oasis of calm, in the midst of all the strife. To do this she became an anchoress in a cell, in a church in Norfolk. Indeed, it seems likely she took her name from that of the church, Julian, Bishop of Le Mans, where she lived.

Her purpose was to live a life of solitude and prayer, and provide counsel via a small curtained window to those that needed it.  She lived entirely with a small cell and a small enclosed yard with a high wall.  That one room had three small windows: One so she could hear Mass and take the Sacrament, a second where a servant placed her food, and the third through which she gave counsel.


However, she did have a companion, in the shape of a cat. This was for entirely practical reasons, in order to keep the rat population down. But it seems likely that Julian and that cat struck up a very close relationship, and that feline certainly must have been a bright light to Saint Julian in those dark times.
(Thank you to Susan, for bringing Saint Julian to my attention.) 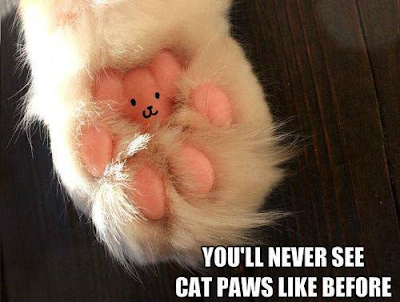