The Cook’s Apprentice
By
Grace Elliot 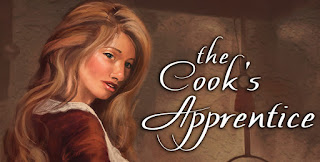 The daughter of a minor aristocrat, Livy Worth is freed from a cold, marriage of convenience by her husband's unexpected death. Determined to shape her own future, Livy’s ambition leads her to the kitchens of Foxhall Pleasure Gardens where she pits her culinary talents against the male chefs. But to succeed she must overcome the prejudices of her mentor, the unreadable and unsettlingly handsome chef, Mr. Blake.

Livy becomes drawn to the deeply private Blake, as he unwittingly hints at a dark past. Never before has she met such a man who can make her pulse race with one lifted brow, and working closely together tension builds between them. Although their feelings are mutual, with neither willing to risk their heart, they reach an impasse.

Originally from the slums of St. Giles that gave him his name, Giles Blake grew up a foundling. As an adult, tortured by nightmares of his past, Blake takes solace is his work. Fear of poverty haunts his every move and he is resolved nothing – not even the distracting Livy Worth – will get in the way of becoming the best chef in Europe. Despite a bone-deep attraction to Mrs. Worth, Blake suppresses his feelings. 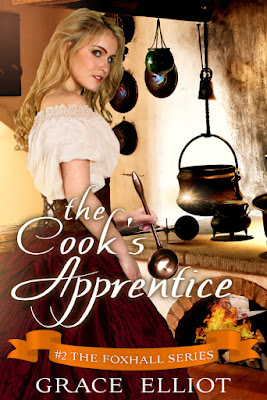 EULOGY'S SECRET - #1 in The Huntley Trilogy
In the four weeks since her guardians’ death, Eulogy Foster has lost everything.
Penniless and alone she seeks the help of her estranged brother, Lord Lucien Devlin. But Devlin throws Eulogy onto the streets and the mercy of a passing stranger, Jack Huntley, who becomes an unlikely ally. As Eulogy seeks the truth behind her birth, she is drawn into the world of art and artists, where her morals are challenged and nothing is as it seems.

Jack Huntley: bitter, cynical and betrayed in love. He believes women are devious, scheming, untrustworthy creatures - and when he rescues a naïve Miss from being raped, his life is about to change forever. There is something about Miss Foster that haunts him and challenges his emotions. But despite their growing attraction, Eulogy will not share her secret, which means he cannot trust her. Caught in a deadlock, both denying their true feelings, events take a sinister turn as someone seeks to silence Eulogy…forever.

HOPE'S BETRAYAL  - #2 in The Huntley Trilogy
One wild, winter's night two worlds collide.
Known for his ruthless efficiency, Captain George Huntley is sent to stamp out smuggling on the south coast of England. On a night raid, the Captain captures a smuggler, but finds his troubles are just beginning when the lad turns out to be a lass, Hope Tyler.
With Hope as bait, the Captain sets a trap to catch the rest of the gang. But in a battle of wills, with his reputation at stake, George Huntley starts to respect feisty, independent Hope. Challenged by her sea-green eyes and stubborn loyalty Huntley now faces a new threat - his growing attraction to a sworn enemy. But a love where either Hope betrays her own kind, or Captain Huntley is court-marshaled, is not an easy destiny to follow. 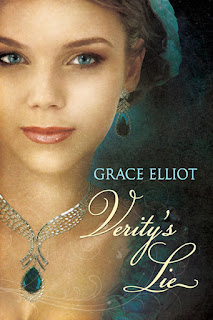 
Charles Huntley, Lord Ryevale, notorious rogue…and government agent. His latest assignment is to protect a politician's daughter, Verity Verrinder, while her father negotiates an alliance against Napoleon. But when Ryevale embarks on a campaign of seduction so as to keep Verity under his watchful eye, he doesn’t anticipate falling in love with his charge.


When Lord Ryevale turns his bone-melting charms on her, Verity suspects she's exchanging an overbearing parent, for a domineering rogue. Denying her attraction to the handsome lord, Verity goes in search of freedom, only to run straight into the clutches of kidnappers. This leaves Lord Ryevale with a stark choice between saving 's peace negotiations or the life of the only woman he has ever loved.
-oO0Oo-
﻿ 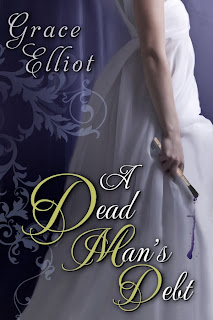 After publicly humiliating a suitor, Celeste Armitage is sent from the ton in disgrace. Exiled to the country she discovers a sketch book of nude studies and is shaken to discover the artist is her hostess’s eldest son, Ranulf Charing, Lord Cadnum. This darkly cynical lord is exactly the sort of dissipated rogue she most despises – and yet her blood heats at the thought of him!
Ranulf Charing, Lord Cadnum is being blackmailed over his late brother’s debts. Whilst visiting his mother, he discovers her new companion, Miss Celeste Armitage, to be a woman of unusual perception and starts to fall in love. But then the jealous fury of the blackmailer is unleashed and Cadnum must cast Celeste aside in order to protect her. However, in underestimating her resolve to clear his name – Cadnum places his true love in mortal danger…


1770’s London
The ringmaster’s daughter, Henrietta Hart, was born and raised around the stables of Foxhall  Gardens. Now her father is gravely ill, and their livelihood in danger. The Harts' only hope is to convince Foxhall’s new manager, Mr Wolfson, to let Hetty wield the ringmaster’s whip. Hetty finds herself drawn to the arrogant Wolfson but, despite their mutual attraction, he gives her an ultimatum: entertain as never before – or leave Foxhall.

When the winsome Hetty defies society and performs in breeches, Wolfson’s stony heart is in danger. Loath as he is to admit it, Hetty has a way with horses…and men. Her audacity and determination awaken emotions long since suppressed.

But Hetty’s success in the ring threatens her future when she attracts the eye of the lascivious Lord Fordyce. The duke is determined, by fair means or foul, to possess Hetty as his mistress – and, as Wolfson’s feelings for Henrietta grow, disaster looms.