My neighbour has three young girls and every Saturday morning, the family set off to the local pool for swimming lessons. It makes sense. We don’t live near the sea, but swimming is an invaluable skill for children to learn. The idea of the swimming pool as we know it originated in the 19th century – but their original purpose is perhaps unexpected because the very first public baths came about because of cholera – or rather to prevent it.

Shortly before Victoria came the throne, in 1832 an outbreak of cholera killed hundreds of thousands of people. This was at a time when few ordinary people had a bathroom to keep clean in, and the poor lacked even basic facilitates such as a “copper” to boil water to wash their clothes.
At the time, no one knew how cholera spread but most people believed that boiling bedding and clothing went some way to protecting them – and remember at this time many people relied on second-hand clothing and bed-sharing.

Kitty Wilkinson and her husband Tom lived in a poor street in Liverpool. However, they were better off than most in that they owned a copper. In an effort to help her neighbours avoid cholera, and at personal risk to herself and her husband, she invited her neighbours to use her wash facilities (for a minimal payment to cover the cost of coal).
The story of Kitty’s generosity spread and the press took up her story. She became labelled “the saint of the slums”, but more than that the idea took hold of providing public facilities for washing. A movement a Public Wash and Bathhouse movement was born. 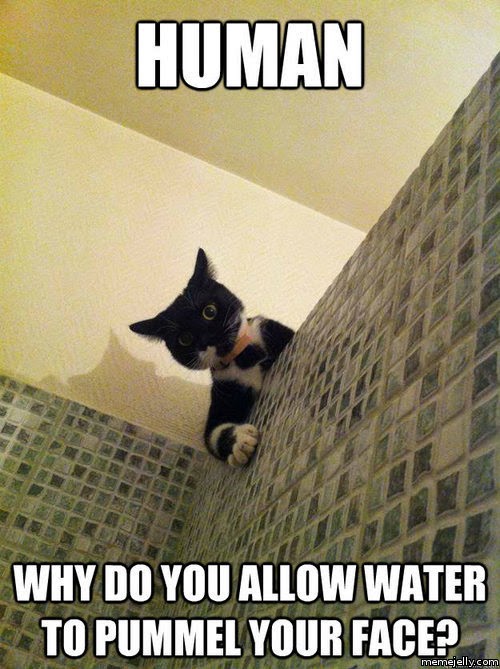 Ten years later, in 1842, the first public bathhouse was opened – in Liverpool, with Kitty and Tom Wilkinson as curators. By 1846 a legal act passed through Parliament which empowered local authorities to build equivalent facilities, paid for out of local taxes.
The first baths to open in London in 1846, in Glass House Yard, then Goulston Square in Whitechapel – serving some of the most deprived slums.
The baths had male and female areas, and were subdivided again by price. There were spacious baths supplied with hot water for those with cash to spare, or the economy version which was cramped – and you guessed it – supplied with cold water. 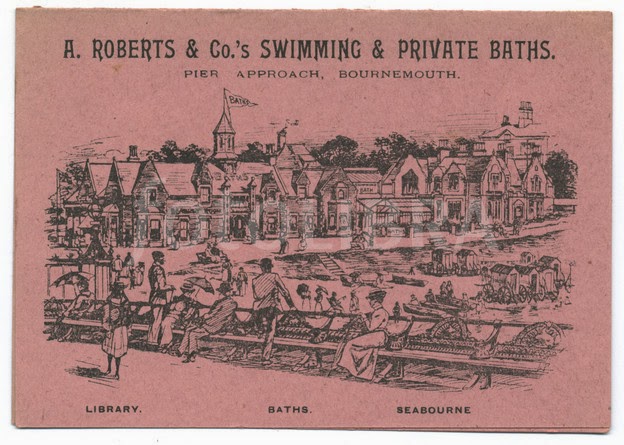 In addition, and cheapest of all, was the public plunge pool. This cost just 1/2 d and was within the reach of young working boys. No soap was allowed, it being said a brisk rub down was adequate for a basic bath. The same unfiltered water remained in the pool for a full week (!) during which silt and dirt accumulated.
But the boys who used these plunge pools weren’t all that bothered about cleanliness- because splashing around in the water with their friends they had fun. They larked around and spent rare moments of fun playing together. Getting clean was a secondary consideration to them.

But other bath users were less than impressed and bigger plunger pools were built and the boys sidelined to smaller pools. But over time, the idea of having fun in water stuck and it was the baths that suffered and fell out of use, leaving the plunge pools to be enjoyed as “swimming pools”.


The first few swimming pools were relatively small, but as their popularly grew, they became larger and larger – and recognised as the forerunner of the swimming pools my neighbour visits every Saturday morning. 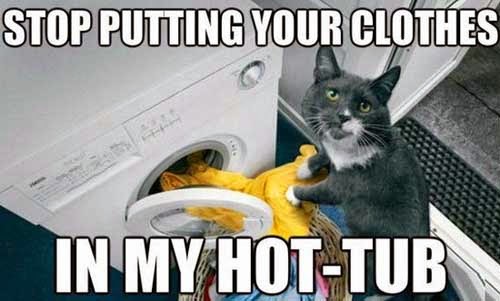 When is a bar of soap like a joint of beef?
Answer:  When they cost the same. 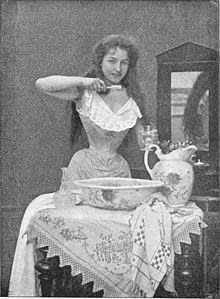 Money for Old Soap
In Victorian England, a four-ounce bar of soap cost roughly the same as a joint of meat. For poorer households, faced with a choice between cleanliness or eating, naturally they looked for other ways to keep clean.

Indeed, since Victorian soap worked best with hot water (it didn’t dissolve or lather well in cold water), this involved additional time, money, and effort, to bring coppers of water to the boil. So all in all, washing with soap and water was not a realistic daily habit for many people. 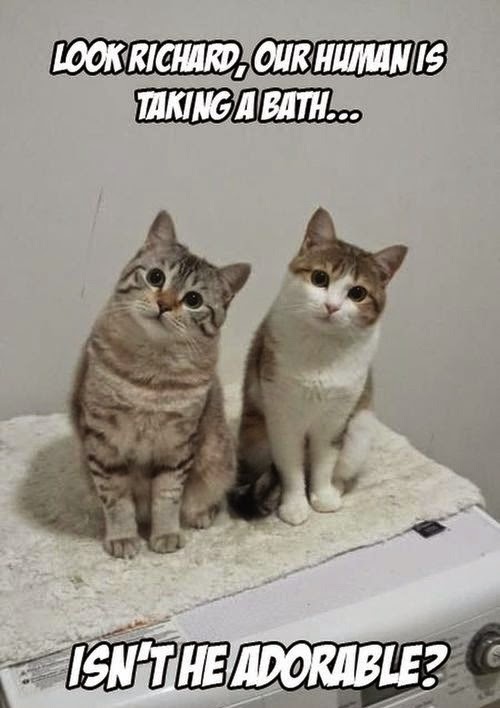 Stand and Deliver
This doesn’t mean people neglected their personal hygiene. Full immersion baths were a rarity but most peoples’ daily routine started with a stand-up wash. For most this was done in the bedroom, although some female servants may have done their ablutions at the kitchen sink – made more conducive by the heat from the range.

A washstand was a standard piece of furniture in many Victorian bedrooms. On it stood a jug of cold water, a bowl, and a clean rage. The person washed first thing in the morning, immediately after rising. Most bedrooms were cold, chilly places, especially as the sash windows were kept open at the top and bottom (regardless of weather) to allow good ventilation and reduce the risk of illness. This meant in winter most people kept their nightclothes and worked on one part of their body at a time.

The art of a stand-up wash was to pour water into the bowl. The soaked flannel was then rubbed on each part of the body, and rinsed. Once the water became too soiled it was discarded into the slop bucket and more water poured into the bowl. Working methodically, all of the body was cleaned, with each part being scrubbed and dried before moving onto the next bit. 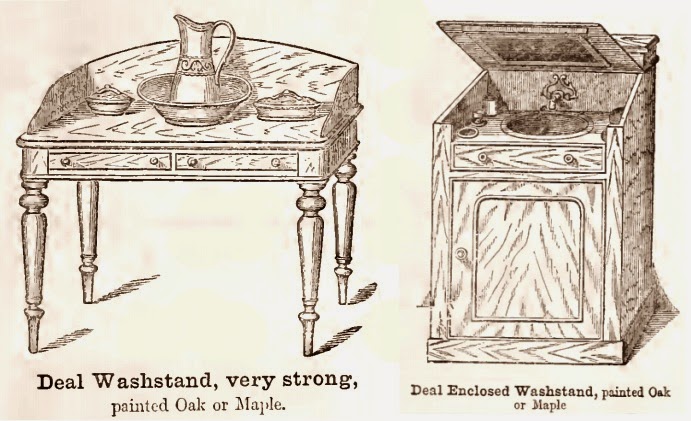 Pore Theory
In more affluent households, a servant rose before the rest of the house. She boiled a kettle, to provide hot water for her employers’ morning ablutions. Washing regularly was a Victorian phenomenon since previous to this it was believed that the skin’s pores allowed entry to disease. Since washing opened the pores, this made the activity potentially foolhardy for those wishing to keep well. Part of the change of attitude came about because the Victorians believed that oxygen passed into the body through the pores, and so clearing away dirt aided this process. 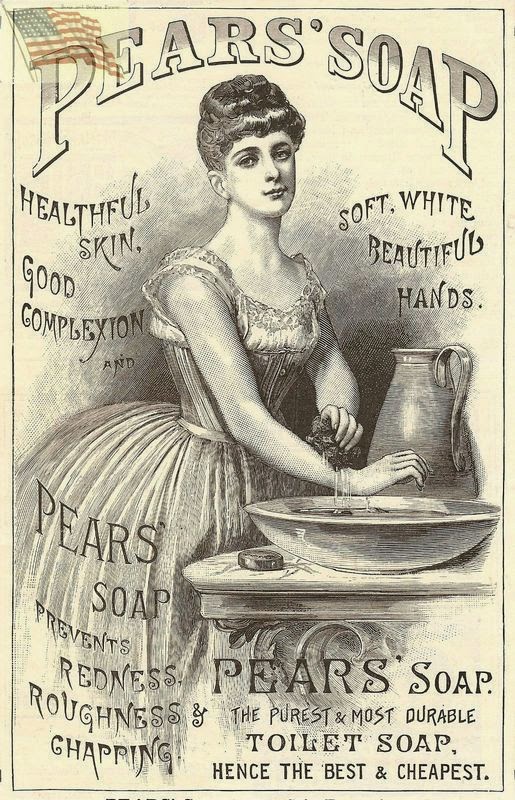 Dress Protectors
Before the advent of anti-perspirants the armpits of garments could be ruined by perspiration. To combat this, ladies who wished to protect expensive gowns used dress-protectors. These were small detachable pads which fitted into the armpit. These could then be removed and washed separately, having done their job of shielding expensive fabrics from sweat. 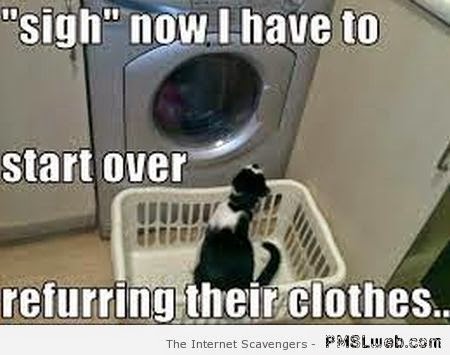 And finally, one home remedy to reduce the unpleasant odour associated with sweaty armpits was a wipe over with vinegar. In theory this might help kill the bacteria that created the worst smells – but the trade of was that it left you smelling like a fish and chip shop.
Posted by Unknown at 11:26 16 comments:

Having trouble getting up in the morning?
Having just had a fantastic few days away, I’m struggling to get back into routine. What could be more of a rude awakening than a hateful alarm clock?

But what if there were no alarm clocks? Bliss, might be your response. But what if keeping a roof over your head and feeding your family meant getting up on time. And in Victorian times that often might rising in the pitch black of night, without even the dawning sun to alert you to the time.
The problem was that in the 19th century a pocket watch or clock were expensive items to purchase, and something that many working class people simply couldn’t afford. After the industrial revolution when people did shift work in factories, the problem of getting up on time was even more acute. 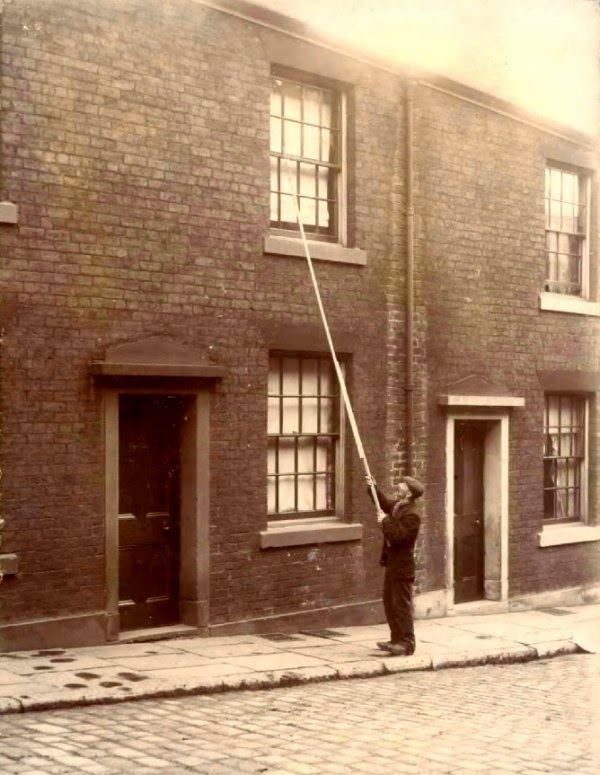 But as is so often the case, where there’s a need someone steps in to supply demand. Enter the “knocker-upper”. This enterprising individual invested money in a timepiece, and then armed with a long pole and a lantern, wandered the streets at night to alert his customers when it was time to rise.
The long pole was used to tap on first floor or hard to reach windows, with some knocker-uppers seemingly using a peashooter for the same purpose.
A typical fee was one penny a month,  and for that the knocker-up would be there outside their window at the appointed time to tap on the windowpane with the end of his long cane. The conscientious knocker-up gave an undertaking not to leave until the occupant had proved they were awake.

And if you think this sounds an unlikely way to make a living, consider how many people needed to get up early. In Baldock, Hertfordshire, had a population of around 2,000 people, and many of the workers were employed by the railway and brewing industry – which meant shift work and early starts. Indeed, there were not one but three local breweries, that all employed draymen whose day started at 3 am so there was plenty of work for a knocker up, who went to bed once everyone else was up. 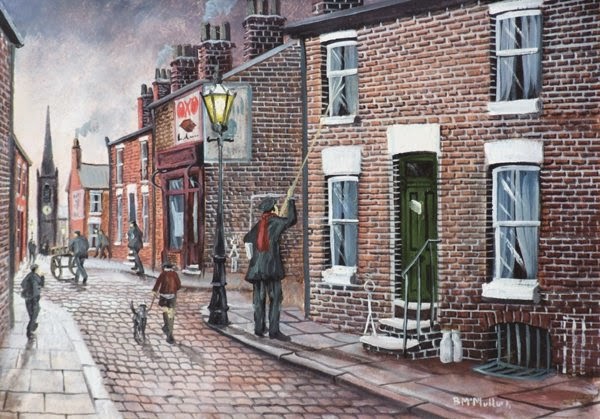 Knocker-upper continued to do their duty through to the 1920s, indeed, the last professional knocker-upper turned in his long pole in the 1950s in Manchester. 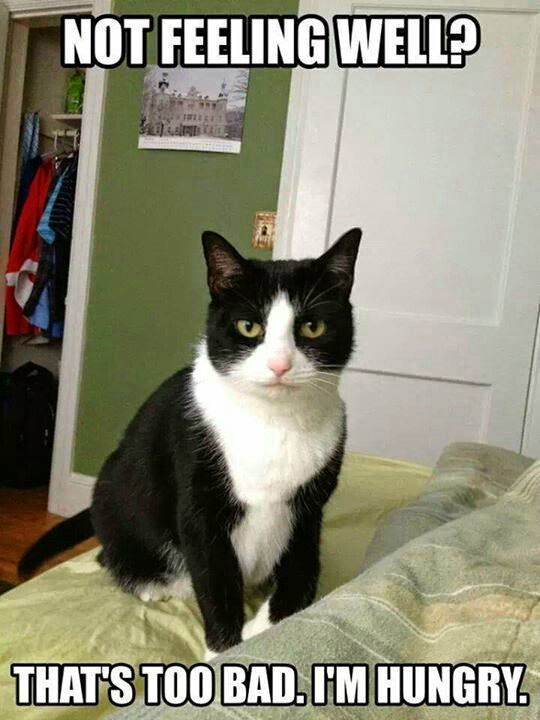 Happy Easter!
A chocolate egg bigger than my head – that’s what hubs gave me this Easter. He knows the way to my heart! Aside from the importance of Easter as a religious festival, it is also associated with chicks, chocolate, and in previous century….new clothes. 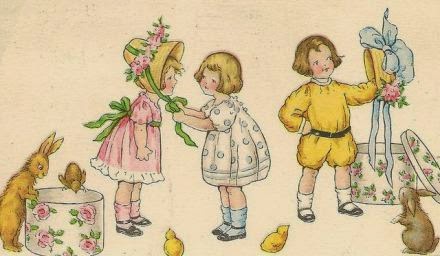 Traditionally, Easter was linked to the wearing of new clothes. Although this was also linked to other times of the year such as New Year and Christmas day, with its symbolism of renewal and rebirth, Easter was a key time to start afresh with new garments.

This tradition was mentioned in 1662 when Samuel Pepys wrote in his dairy about getting new clothes for his wife “against Easter”.  Previous to this, Shakespeare hints at the importance in Romeo and Juliet, 1597, when Mercutio asks, “Didst though not fall out with a tailor for wearing his new doublet before Easter?” 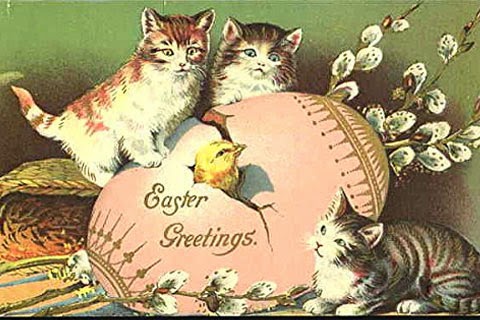 Apart from anything else, it seems one penalty if you didn’t respect this superstition was that you ran the risk of being fouled upon by a bird.
“It is deemed essential by many people to wear some new article of dress, if only a pair of gloves or a new ribbon; for not to do so is considered unlucky; and the birds will be angry with you.” Writings from 1911

This is borne out by Burne, writing in 1883
“…he used to look out anxiously for rooks on Easter Day, and run to shelter if he heard on cawing, in spite of his mother’s habitual care to provide each of her family with some new garment for Easter wearing.” 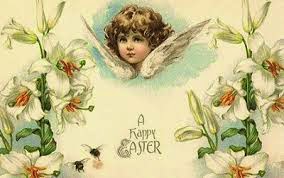 The wearing of new clothes on Easter Sunday, also ties into to other superstitions regarding garments. There was a strong superstition that to be lucky, new clothes should first be worn to church for a sort of “blessing”. The consequence was to call bad luck upon your head.
“You must be careful not to put on any new article of clothing for the first time on a Saturday, …or some severe punishment will ensue. One person put on his new boots on a Saturday, and on Monday broke his arm.“ Jefferies. 1889

But if you couldn’t afford new, but bought second hand clothes, there was a way to counteract any lingering back luck. If you bought a garment which contained money in a pocket, this ensured prosperity for the rest of the year. Seemingly those selling second hand clothes cottoned on fast and learnt that simply by placing a small coin in the pocket they could inflate the price of the garment for sale! 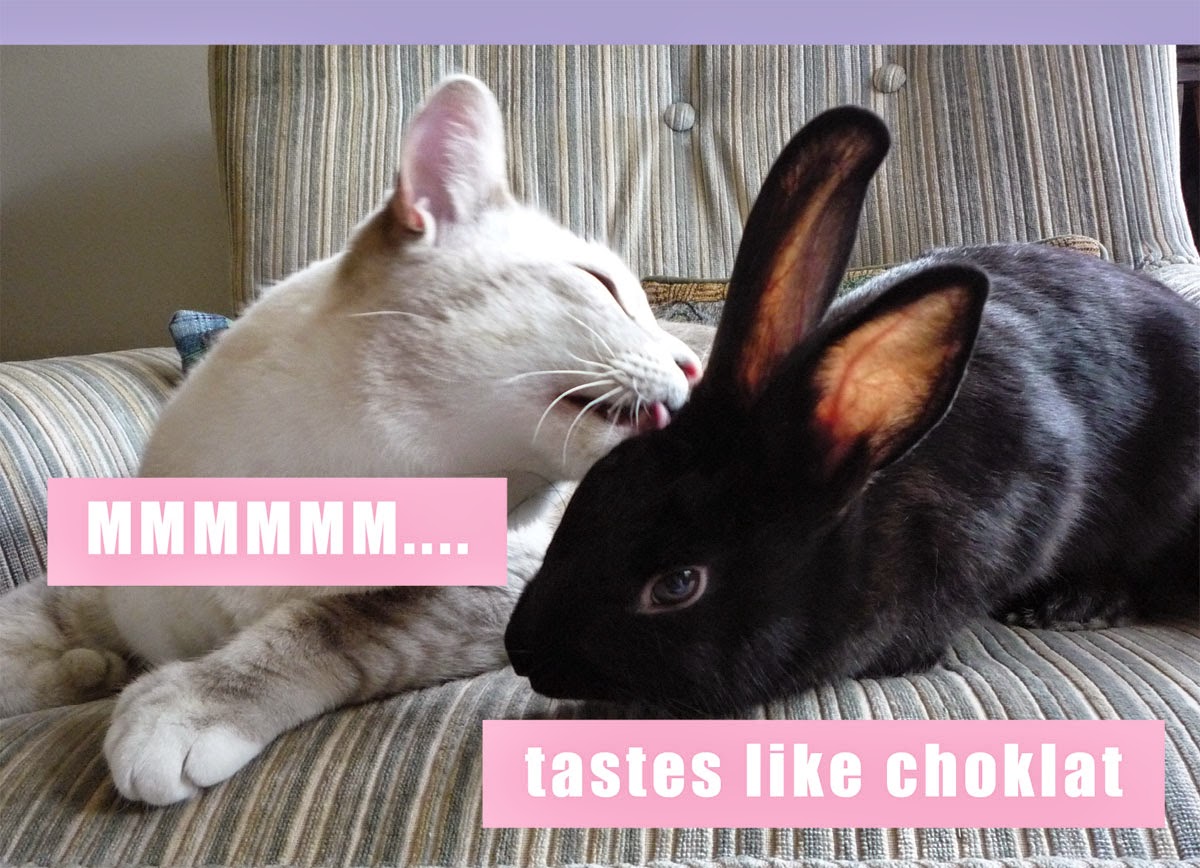