A Game of Swans: A Short History

A Game of Swans

Swans have long been associated with royalty. This majestic bird is reputed to have been imported from Cyprus to England by King Richard I around 1189. This was widely held as fact until the middle of the 20th century when records came to light of an inventory of a feast served to King Henry III at Winchester in 1247.
The banquet included 40 swans that had been collected from all over the kingdom, including Cumberland in the north, and Somerset in the west. Now the swans are not rapid breeders in the same way rabbits are, and it seems unlikely that the wild swan population was so diversely spread in such a relatively short space of time.
Whatever their origins, their elegance and beauty was laid claim to by royalty and ordinary folk were not allowed to own them. However, this didn’t stop illegal ownership. By the late 1450s it wasn’t unheard of for yeoman to steal cygnets to keep themselves.

In 1483 a royal decree was passed which stated that all birds belonged to the crown, unless the ’owner’ had been granted a special dispensation. In these cases the birds were marked with a ‘swan mark’ on the beak so as to identify them.

Each mark was registered, and the design was usually complex, perhaps incorporating part of the coat of arms of the nobleman who was lucky enough to be permitted to own the birds. It was during Queen Elizabeth I’s reign that the register of swan marks was at its largest with around 900 marks registered.

Of course, the birds had to be marked and this lead to an annual ritual of ‘swan-upping’. This involved visiting the riverbanks where the birds breed to catch the newly hatched cygnets and mark them.

A court proceeding from 1722 gives a glimpse into the ritual that was sometimes involved with swan upping.
“…agreed to go swan-upping on the first Monday in August…the court desired the Renter Warden would be pleased to provide a dinner, three six-oared barges to carry the company up water…”

With the passing centuries, people became more aware of the cruelty involved with permanently marking a bird’s beak. The RSPCA became involved in 1878 and as a result the practice dwindled and due to public pressure, stopped altogether. However, the correct term for a group of swans remains – as a ‘game of swans’. 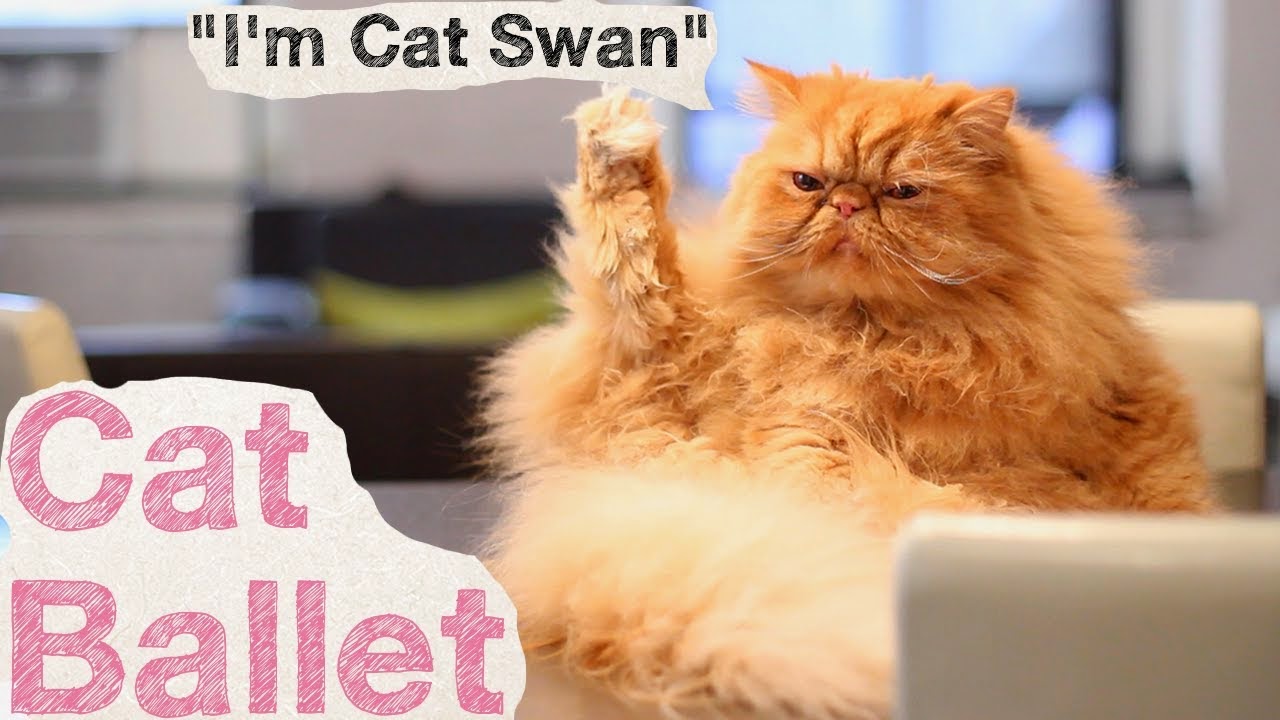 Email ThisBlogThis!Share to TwitterShare to FacebookShare to Pinterest
Labels: A game of swans, swan upping

A Rage of Maidens and a Bevy of Ladies

‘Maidens’ is a delightfully old-fashioned word that sums up images of wholesome milk-maids blushing coyly when the handsome squire glances in her direction (or is that just me?) In the 15th century the change from girl to woman started at around 12 years of age, and represented a ‘perfect age’ in a romantic way. However, did you know there is a collective term for a group of maidens, and it is – a rage of maidens.
Hmmm.

Apparently, in this context ‘rage’ is a derivative of a 15th century word which means to romp –or play wantonly. (There goes the image of coy blushes!) Whether this is a reflection on the social attitude of our maidens is anybody’s guess, however, the 15th century was perhaps more realistic about a woman’s nature urges than society was just a couple of centuries later.
So what of more mature ladies? The collective term for them is perhaps more familiar to us – as a ‘bevy of ladies’ – (a bevy of beauties?) This term can be traced back to 1702 and John Kersey’s New English Dictionary. The term ‘bevy’ was also appropriate for groups of roe (deer), quails, or larks. Along with these other delicate creatures, our bevy of ladies was upper class and refined.
It is oddly appropriate to group ladies with livestock, because in the 18th century a woman was indeed the property of her husband and used mainly for breeding – her role being to produce heirs.

There was a less poetic term for her less salubrious sisters in arms, those who were paid for providing pleasure for men, and it is ‘a herd of harlots’. In medieval times prostitution was rife but widely accepted. St Thomas Aquinas wrote:
‘If prostitution were to be suppressed, careless lusts would overthrow society.’
Society had its own way of dealing with prostitutes, preventing their company from sullying respectable women, by confining them to certain areas. However, it was natural for the prostitutes to seek out trade where it was most likely to be found. Therefore they congregated around taverns, universities, and popular bathing houses, and calling them a herd is perhaps another way of marking them as livestock. 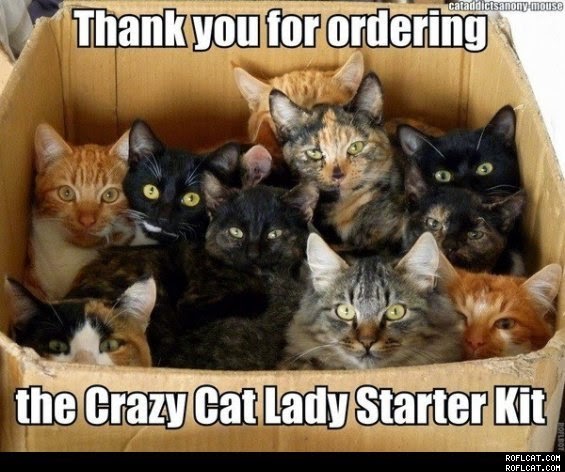 Email ThisBlogThis!Share to TwitterShare to FacebookShare to Pinterest
Labels: bevy of ladies, Rage of Maidnes

A Short History of the Yoyo 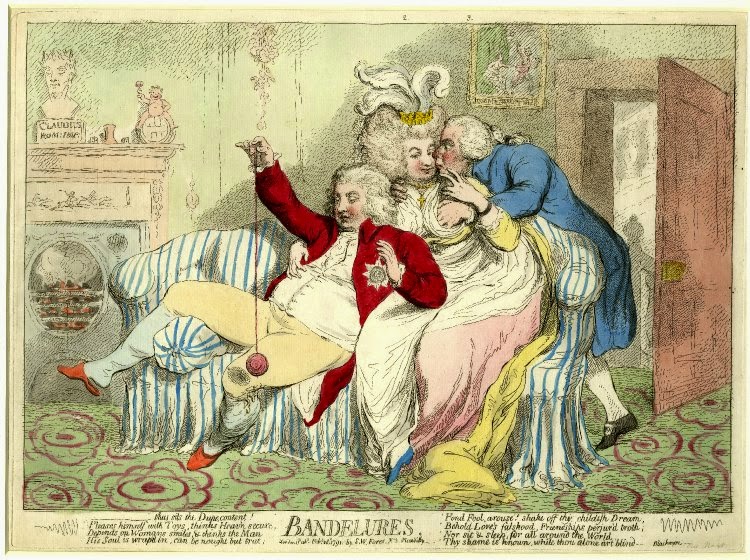 If you chose answer c), then give yourself a pat on the back. According to urban myth, the yoyo is the second oldest toy (the first is the doll) to have been invented. In ancient Greeks, children played with yoyos made of terracotta, metal, and wood. The two halves of these yoyos were decorated with pictures of Greek gods.
Around 400 years ago, in the Philippines, yoyos were used as weapons. Agreed, they weren’t toys, but altogether more serious objects with studs and razor sharp edges that were attached to 20 foot ropes and thrown at the enemy (presumably, you took a lot of care when the yoyo returned to the thrower). Indeed, the word ‘yoyo’ meant ‘to return to the sender’. 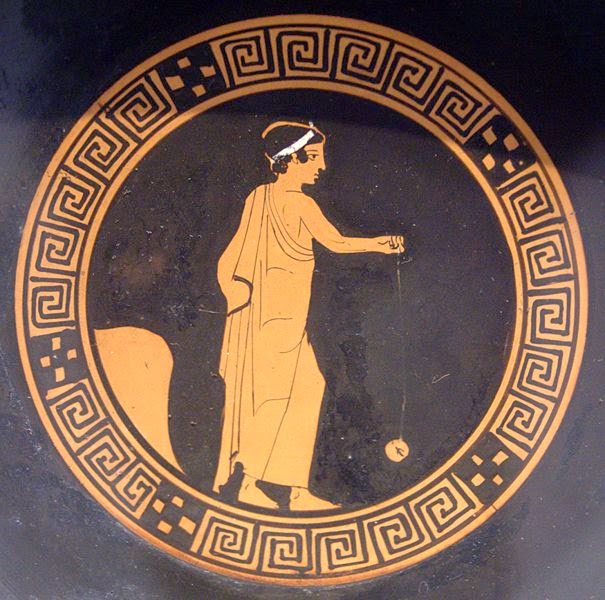 As the 1800s dawned the yoyo transferred from the Orient to Europe. It was initially known as the bandalore, whirly gig, or Princes of Wales toy.  This print by Gillray, showing the Prince reclining on a sofa whilst dallying with a yoyo, offers some explanation as to why the device was linked to him in name.
Also, around the same time, 1789, there is a painting of a young dauphin, then aged 4 years old, the future, King Louis XVII playing with a yoyo.
The device first gained popularity in France. Napoleon was known to carry and use a yoyo, -possibly the equivalent of a PSP or hand-held gaming device in the late 18th century! Apparently he was seen playing with a yoyo on the eve of the Battle of Waterloo.
For a period of around 20 years, the yoyo was the ‘must have’ have fashion accessory for adults, and described as offering ‘stress relief’. It wasn’t until after this that the yoyo became labelled as a childrens’ toy. 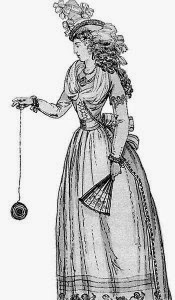 It was about the 1860s that the yoyo became popular in America, and patents for the toy were posted in Cincinnati. These patents mention improvements such as ‘weighting’, which improved the fly of the yoyo, and devices that acted as a flywheel for better yoyo returned.  It was from there that the yoyo flourished and the devices we recognize in the modern day were born.
Posted by Unknown at 09:36 No comments: