Whilst on holiday on the , I was lucky enough to see not one, but two, red squirrels. Granted, they aren't the brightest creatures on the planet (the first one ran alongside the car trying to outpace it, rather than escape up a tree!) but they win hands down in the cute stakes.


Sadly, red squirrels are becoming a rare sight in the , pushed out by the hardier and more aggressive grey squirrel. The later are a non-native species to Britain and were introduced in Victorian times by a naturalist, Frank Buckland - and this is where the zoophagy comes in - he imported grey squirrels to eat!


Zoophagy is the pursuit of eating animal flesh - and the more unusual the better.
Born in 1826, Frank Buckland trained as a doctor, although his first interest was always natural history. To give him his due, he paid some attention to the medical profession because he noticed most nurses couldn’t read! He tested nurses with a medicine label.


What the label actually said was:
'This lotion to be applied externally only.'

However the nurses' reply was:
Two spoonfuls to be taken four times a day.'


Buckland eventually gave up his medical career to pursue his love of natural history, and became an expert in fish production. However, he took it as his personal mission to broaden the traditional 'roast beef' diet of the British and was a pioneer of zoophagy. Buckland regularly dined on delicacies such as mice in batter, horse tongue, squirrel pie and stewed mole (the latter reportedly tasted like "poo".)  Indeed, Buckland had friends at the Royal Zoological Gardens (now London Zoo) who contacted him when an animal died, in case he wanted to eat it!
In a quest to be even more adventurous, in 1859 he founded the Acclimatization Society. Their aim was to search for new and more exotic meats to eat, and at the society's inaugural dinner in 1862 the menu included roast kangaroo, boiled sea slug and grilled parrot. Such was his renown that it was said when he walked past:


It was to broaden his dining options that Buckland came to import the grey squirrel form , with the subsequent disastrous decimation of our native red squirrels.

﻿
As an aside, if you are tempted to think grey squirrels are 'cute' - it is an offense punishable by 2 years in prison, to nurse and re-release an injured grey into the wild in the . If you find a grey squirrel in distress, then by law you are required to take it to a veterinarian for humane destruction. This may seem harsh, but in 2001 the grey population was estimated at 2.5 million and the red squirrel is only hanging on in certain protected areas, including the Lake District and the . 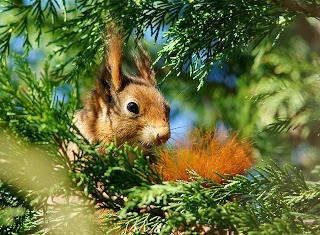 As a vegetarian myself, researching this post set me thinking about what makes some meats acceptable to eat, and others repulsive. What is your opinion? Why should it be OK to eat lamb or chicken, but we squirm at the idea of mole or parrot?
Photo courtesy of British Wildlife Centre
Posted by Unknown at 03:49