GE - I understand you have exciting news that Courting has just been published. Please tell me a little about it.
JV - Courting is about falling in love with your best friend.  Daphne realizes she’s attracted to her best guy friend, Noah, at one of her friend’s weddings and she tries everything she can think of to ignore the attraction.
GE - What aspect of the book are you most pleased with?
JV - I really like how the story came together.  As I wrote it, pieces just fit together.  And Noah is such a sweetheart; it’s hard not to fall in love with him. Daphne is also a bridesmaid in several weddings, so I got to have a lot of fun with all the bridesmaid duties.
GE - How did you feel when you first learnt that Courting Sparks was to be published?
JV - I was so excited.  It was the second book I had written and the second book I had published.  I think no matter how many books you write, you fear that your editor will hate the next one and this fun adventure you’ve been on will just disappear. So when it does sell, it’s even more exciting.
I was also pregnant with my youngest daughter and had just crawled in bed for a nap when my editor called.  I just listened to the answering machine then called her back after I finished my nap.  I didn’t really sleep much, but I was too tired to move.

GE - What is the best and the worst thing about writing romance? Do you find some aspects more enjoyable than others?
JV - I love writing romance because of the fairy tale aspect of it.  There’s always a happy ending.  It’s a magic we all yearn for and like to see happen for everyday people.   I think the worst thing for me is finding a large enough chunk of time to concentrate, especially for revisions. When I’m writing the rough drafts, I can just concentrate on the moment and write, but with revisions, I need to keep track of what is happening in the story and who is standing or sitting.  Otherwise I could have someone sit down three times without standing up once.  I once had a character attempt to curl up on a couch that I had removed from the scene while she was balancing a pie in one hand.  My critique group had a lot of laughs over that one.
GE - What would your nearest and dearest say is your most annoying habit?
JV - I tend to be very focused when I’m working on something.  I have a hard time switching gears and doing something spontaneous when I have a routine set. Especially knowing the work that will be required with three kids off their nap schedule. 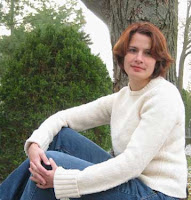 GE - It’s been lovely chatting with you today Joselyn and before you go, where can I find out more about your books?
JV -
There is more information at my website http://joselynvaughn.com/.
BOOK BLURB.

Dusting off the ashes of a failed relationship, Daphne Morrow decides she is ready to date again. But when her scorched prom photos are discovered to be the ignition point for a small forest blaze, marking her as the prime suspect for the arson, she finds they’re not the only part of her past sparking interest. After a friend’s wedding provides a romantic interlude with her longtime friend Noah Banks, Daphne tries to explain away her attraction to him: the atmosphere of the wedding, his resemblance to her ex, his heroic efforts as a volunteer firefighter. Still, their desire just won’t sputter out.
When the arsonist strikes much closer to home, Daphne fears she must risk Noah’s friendship to find the culprit and clear her name. She’ll know their love is real if his interest isn’t put out by her need to uncover the truth.
Courting – Excerpt
Noah waved her over. “Want to dance?”
“Sure.” She followed him to the dance floor. He pulled her into his arms and they swayed to the music. She expected the casual comfort she usually felt when Noah touched her.  She didn’t get it. Her nerves sparked like downed power lines. Miranda and Max playfully bumped into them as they spun around the floor.  Miranda grinned at Max like he was her prince.  They kissed.
“It’s the romantically tinged atmosphere of the wedding,” she muttered, as Noah twirled her around and they proceeded to bump Beth and Jake.
“What was that?” Noah asked.
“You know I’ve danced at weddings in every color.  Purple, blue, yellow, Barbie pink, several times.” She nodded to her dress. “But never white.”
“It’s not a bad thing it didn’t work out with Aaron.”
“I know.  It’s better to know he’s a weasel now rather than be stood up at the altar, but it doesn’t make it hurt any less.  At least he could have had the guts to break up with me in person.  Maybe then I wouldn’t be taken in every time he calls. Sorry, I shouldn’t say things like that about your cousin.” She sighed. “But whenever he calls…”
“It reminds you of it all over again,” Noah finished for her.  “You’re the only one he calls anymore.  I think he’s really messed up.”
“He sounds so contrite about cheating on me. About how much he regrets it. I’ve stopped falling for it and I shouldn’t dwell on it.” She shook her head. “What about you?  Do you think you’ll ever get married?”
Noah looked away.  She saw resentment and disappointment cross his face.  “I want to.  But it’s complicated.”
Daphne wanted to ask why but the tight look on his face told her he didn’t want to talk about it. The first beats of the hokey pokey blared from the speakers.  Noah hurriedly steered her off the floor and toward the bar. “Do you have any practical jokes planned for Miranda’s apartment while they’re on their honeymoon?”