THE CATS’
Hello and welcome to my first posting of 2011!
This week I look at how the Victorians fed their pets and the ‘Cat’s ’ 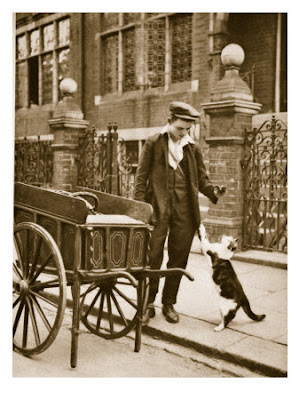 ‘Many visitors came to the streets…the muffin man and Cats’ The latter carried their wares on long skewers over their shoulders. The smell drew all the strays.’
(A London resident writing in 1920.)
From the 1700’s until the early 20th century the ‘Cat’s Meat Man’ was a common sight, hawking meat around the city streets of . Charles Dickens even wrote about how, as a 6 year old child when confined to the house through ill health, he wrote a play called ‘The Cat’s ’ 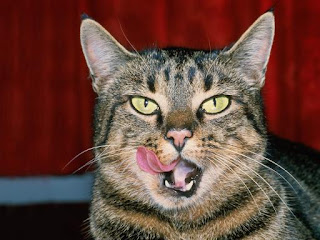 Indeed the Cats Meat Men had a uniform, as described by the Victorian chronicler of life, Henry Mayhew. This consisted of a shiny hat, black plush waistcoat, corduroy trousers and a blue apron with a blue and white spotted handkerchief around the neck.
In their heyday around 1,000 Cats’ Meat vendors; men, woman and boys, plied the pet meat trade.  Part of the attraction was the low set up cost to make a relatively lucrative living. A man could set up with a couple of shillings for initial meat supplies, a barrow, knife and scales, all of which could be purchased second hand for between 4 and 15 shillings. They plied their trade with a familiar cry, much like an ice cream van’s tune today, of:
“Cats’ meat – cats’ meat, on a skewer come and buy.”
(Sung to the tune of ‘Cherry Ripe.’) 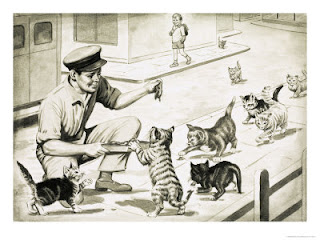 Each seller serviced on average 200 cats and 70 dogs and some did extremely well, such as one Mr. Cratchitt. When Mr. Cratchitt’s estranged wife was taken to court for none payment of debts, her husband came to the rescue.
‘It’s all right Your Worship…I’ve arranged to pay all her debts. For 30 years I’ve had a cats’ meat round in the City and …so I’m a man of independent means.’
‘What,’ cried the magistrate, ‘You’ve made a fortune out of cats’ meat?’
‘Yes,’ said Meatman Cractchitt, ‘Funny isn’t it.’ 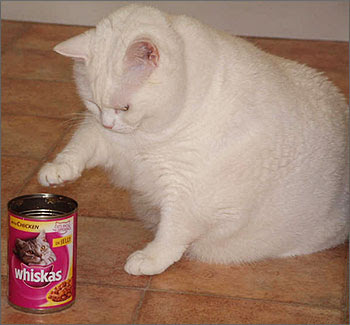 http://www.theromancereviews.com/viewbooksreview.php?bookid=960
Review EXCERPT:
If you have any appreciation for historical romance, you will not only enjoy this novel immensely, but will want to make a space for it on your keeper shelf! A Dead Man¡¯s Debt will charm you, surprise you, entertain you...and by the end, will warm your heart with the overall beauty of this story.
Posted by Unknown at 12:17