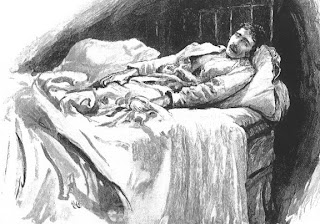 The previous post recounted how the Victorian fashion for green wallpaper could have unexpected...and deadly consequences....because arsenic was used to create rich colours (scroll down to read this post.) Today we look at how green wallpaper entered Victorian popular culture - as a potential murder weapon! 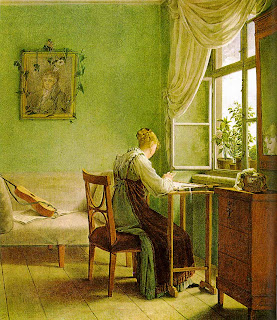 The ‘Chambers Journal of Popular Literature, Science and Arts’ relates the story of an orphan boy called Sir Frederick Staunton.

Freddie’s guardian, his Uncle, wished the boy out of the way so that he could inherit, and so sent his ward to stay with the local vicar. His instructions were to give the boy the best room in the house, a room which just happened to be decorated with a wallpaper of a:  “..rich, deep, emerald hue.”  Apparently, the locals claimed the room was cursed by a monk in the time of Henry VIII, in retribution for his dissolution of the monasteries, it being said that:

“Several deaths had occurred in the green chamber in particular, for the most part blooming girls who had faded and pined under ‘the curse’ until their dim eyes had looked their last at the emerald-tinted walls.”

Fortunately for a rapidly sickening Freddie, a visiting physician spotted the significance of the green wallpaper, linked it to the vapours given off from the arsenic tinted pigment and had the boy removed from that room .... and all ended happily. 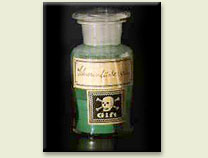 Of course life is never that straighforward and unhappily, arsenic content wasn’t restricted to green wallpaper, but also present in blue, pink, yellow, brown, gray and white. In 1870’s America, the Michigan Board of Health assembled books of samples of arsenical wallpaper, called ‘Shadows from the Walls of Death’  circulated to every state library with the aim of increasing awareness of this silent, but deadly, danger.
Even so, it seems Queen  remained unaware of the risk of arsenic in wallpaper, when in 1879 she abraided a guest for being late for his audience. His defence was that he had slept poorly because of the green wallpaper in his bedroom. Astonished to learn of the dangers of arsenical papers the Queen immediately had every bit of wallpaper stripped out of .
However not everyone was so easily convinced. The famous artist and designer, William Morris,  only removed green arsenic pigments from his wallpapers under protest, writing in 1885:
“….it is hardly possible to imagine….a greater folly…than the arsenic scare.”
Eventually in the 1870’s it was public fear of poisoning that saw the decline in fashion for green. Some manufacturers’ tried to forestall this by printing ‘Free From Arsenic’ on the back of their papers. This backfired since when tests were run on supposedly ‘arsenic free’ papers,  were found to contain very high levels indeed. Public confidence never recovered and green walls went out of fashion! 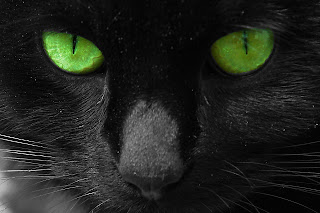