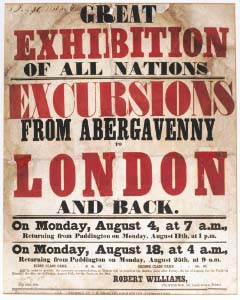 
Housed within the magnificent (see previous post), ’s idea was to draw together up-to-date technology from all over the world, to display under one roof.

The concept was a roaring success. The Great Exhibition received over 827,000 visitors in the (just under) six months it was open. The busiest day was October 7th (just before the Exhibition closed) with a total of 110,000 visitors on that one day. At one point 92,000 people were inside the at the same time – a world record of the day. 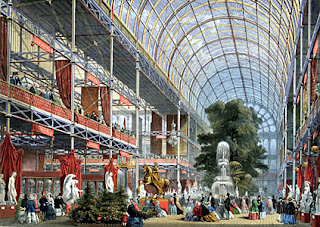 But amidst the hustle and crush, there was one oasis of calm – the Newfoundland Exhibition. Their display took the visitor through the production of cod liver oil and mysteriously, wasn’t very popular.
The American display nearly didn’t happen at all. Congress provided sufficient funds to ship their exhibits as far as  no further. With their goods impounded at the docks, it was an American philanthropist, George Peabody, who stumped up the $15,000 to get the display up and running. However, after this unpromising start, the goods themselves came as a huge surprise. There were innovative machines for doing really useful things such as a sewing machine by Elias Howe, an automated reaper by Cyrus McCormick and an automated revolver by Samuel Colt.
﻿
﻿
﻿But strangely, the most popular place within The Great Exhibition were the elegant retiring rooms. Furnished with flushing toilets they were a revelation in themselves and not to be missed. In one day alone, these toilets accommodated the comfort of 11,000 people – quite something when at the time the boasted of having two, outside privies.
The Great Exhibition was such a success that it generated a profit of 186,000 GBP. With this money thirty acres of land, just south of was purchased which became affectionately known as ‘Albertropolis.’ It was on this site that most of the famous institutions and museums that dominate to this day were built: The Royal Albert Hall, and , and the of Art and of Music. So even though The Great Exhibition is gone, the legacy lives on.
﻿
﻿