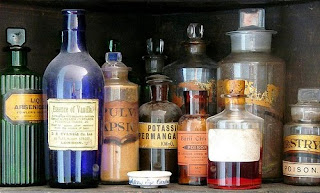 In the early 19th century, the rise of the insurance industry gave murderers a new motivation - a quick profit! At the time it was said of life insurance that although it gave peace of mind, it also provided a path to easy wealth; "by insuring a life and destroying it."
For those Victorian's with a mind to 'get rich quick', poison was the perfect tool since many of the victim's symptoms could be passed off a natural disease. Added to that arsenic, strychnine and other toxins easily available, for use as rat bait and the like, and could be bought from the local chemist.  The Victorians became paranoid about poison because of a deadly combination of ease of purchase, poor regulation and newspapers reporting on murder trials.

"To take heed against poison [was now] one of the waking thoughts common to all."
Journalist writing in 1850.


Whilst the upper classes took out life insurance, the lower classes joined 'Death Clubs' to avoid the disgrace of a pauper's funeral. Run by Friendly Societies (where tradesmen paid in a weekly amount, in return for financial support if they couldn't work), the idea behind a Death Club was to contribute to a fund that paid out on death, to cover funeral costs.

The average cost of a funeral was one to two pounds, and some clubs paid out four or even five pounds. Because of the tidy profit to be made by disposing of an unwanted spouse, parent or child, the membership lists soon became known as "The catalogue of the doomed," and amongst the women who inhabited the Manchester tenements there was a saying:


"Aye, that child will not live, it is in the burial club."


Some poor children were enrolled in multiple clubs, so that when each of which paid out on death, the parents reaped twenty pounds or more. A clergyman's wife visiting a bereaved mother to comfort her for the loss of a daughter, was shocked to overhear a neighbour saying:


"A fine thing [for the mother] as the child's in two clubs."


Later in the Victorian era Death Clubs were widely regarded as: 'the prolific mother of arsenical murders" and in response to the problem, in 1850 Parliament enacted a statue prohibiting the insuring of children under 10 for more than three pounds.

An example of such fearful ruthlessness was Mary Ann Cotton, a candidate for the title of being the most prolific serial killer prior to Doctor Harold Shipman in the 1990's. Cotton, a woman of 'comely' appearance and a former Sunday school teacher used arsenic to murder her mother, three husbands, fifteen children and step-children, and a lodger. In each case the cause of death was 'gastric complaints' and Mary benefited from insurance payments. It took twelve years for people to become suspicious, for Mary to be put on trial and sentenced to death.

But finally, what really unsettled the Victorian's was that the killer, Mary, was female. Poisoning was a cowardly, secretive, skulking act and that a female murderer was convicted only confirmed a growing male suspicion that women were sinister, deceitful beings in an almost hysterical way.


"It is the softer sex who are everywhere addicted to this propensity.[to poison]"

Next week: Sweet Temptation - the hidden danger of poisoned sweets.
Posted by Unknown at 05:29