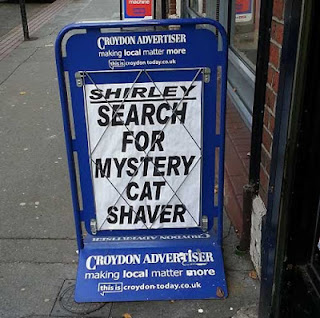 Q. What links Fleet Street to traditional tiered wedding cakes?
A. St Bride's church (read on for more!)
Today's post is about some of the history of Fleet Street, a name synonymous (until the 1980's at least) as home of the British newspaper industry. The name originates from the River Fleet, which is 's largest underground river.
Perhaps Fleet Street's most notorious resident was Sweeney Todd - the so-called "Demon Barber of Fleet Street". Todd was reputed to have cut the throats of his clients, stolen their valuables and then disposed of their bodies in pies baked by the enterprising Mrs Lovett. However, despite references to Tod starting in the mid-19th century, there seems no factual basis for his story, indeed there is no Sweeney Todd mentioned in contemporary popular press, listed in the register of the Barbers' Company or in the Old Bailey's records.
The exact origins of Todd's gruesome exploits are unclear but it seems likely there were examples of early 'urban myths' circulating in Victorian times, about what happened to country bumpkins who came to .
Indeed, Charles Dickens alludes to people being made into pies in Martin Chuzzlewit (1844). Here, Tom Pinch gets lost in the evil city:
"I don't know what John will think of me. He'll being to be afraid I have strayed into one of those streets where the countrymen are murdered; and that I have been made meat-pies of, or some such horrible thing."
Tom's evil genius did not lead him into the dens of any of those preparers of cannibalistic pastry, who are represented in many standard country legends as doing a lively retail business in the Metropolis.
Could it be that if Sweeney Todd had not existed, it was necessary to invent him?
Whilst on the subject of pies and dining, since the time of the Great Fire of London, Fleet Street was renowned for its taverns and coffeehouses. Tantalisingly, one of these that survives to the present day is Ye Olde Cheshire Cheese (a tavern had been on the same site since 1538) destroyed in the Great Fire and rebuilt in 1667, it is open for business to this day. Charmingly, to the right hand side of the entrance is a list of all the monarchs who have reigned since the Cheese opened its doors.
And whilst on the subject of food, this brings us back to what links Fleet Street to the traditional tiered wedding cake design.
The answer is St Bride's Church.
Arguably one of the most ancient churches in thought to be founded by 7th century Celtic monks under the auspices of St Bridget of . The church has a number of famous parishioners, such as Samuel Pepys, who was baptised here and then in 1644 buried his brother Tom in the vaults- which were reputedly so full that Pepys had to bribe the gravedigger to jostle bodies around to make room.
Destroyed by the Great Fire, Christopher Wren was commissioned to redesign St Bride's and in 1703 work on St Bride's was completed, including a 234 foot spire with four octagonal tiers of diminishing size.
Legend has it that an apprentice pastry cook, William Rich, fell in love with his master's daughter. At the end of his apprenticeship Rich set up his own business within sight of St Bride's and gained consent to marry his love. Determined to impress at the wedding breakfast Rich wanted a truly stunning cake and inspired by what he'd seen of St Bride's, created a wedding cake with diminishing tiers…and a tradition was born.