CAT - "a domestick animal that catches mice, commonly reckoned by naturalists the lowest order of the leonine species."
Dr Johnson's definition from the 1755 dictionary.

﻿
When Dr Johnson wrote that cats were 'commonly reckoned' the lowest feline species, it is my opinion he was being ironic - for the great man was a huge fan of cats. During his life he owned (or 'was owned by'!) several cats, of whom the most well-known was Hodge. In fact, so well-known was Johnson's affection for Hodge that a statue of the cat, appropriately seated on a dictionary, is to be found at the far end of .


Dr Johnson did most of his work assembling the dictionary, in an attic room at .  According to his biographer, James Boswell, Johnson was in fact a cat lover.
"Nor would it be just….to omit the fondness which he [Johnson] shewed for animals which he had taken under his protection."
This kindness extended to visiting the fish market in person, in order to select the best oysters for his cat since he didn’t want to put his servants out.
"I never shall forget the indulgence with which he treated Hodge, his cat: for whom he himself used to go out and buy oysters, lest the servants having that trouble should take a dislike to the poor creature."
So did Johnson's partiality for felines colour his dictionary definitions?
How do his definitions compare to the modern equivalent?


Let's take a look and find out.


Hmmm, I prefer Johnson's more poetic version, rather than the more scientific explanation.
One, nil to Dr Johnson.

To LAP - "To feed by quick reciprocations of the tongue."Dr Johnson 1755


Is it just me, or is Johnson's definition more evocative? The definition is very passive, 'taking up liquid' - how exactly is this done?
Another vote for Johnson, from me.

MOUSE - "The smallest of all beasts; a little animal haunting houses and corn fields, destroyed by cats."
Dr Johnson 1755


This is one of those answers that have you scurrying around the dictionary. If you aren’t sure what a mouse is then you're probably going to be unclear what a rodent, shrew or vole is….
Dr Johnson wins hands down for clarity.


OK, so I might be biased but it seems to me Johnson's almost poetic language when describing cat-related words exemplifies someone who knows, loves and enjoys observing cats. 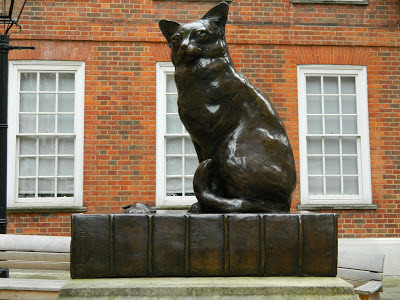