Today I'm delighted to welcome Sunday Times best-selling author Freda Lightfoot to "Fall in Love with History".
Freda has written a thought-provoking post about how people change during wartime, and how a reunion did not always mean a happy ending.
G x 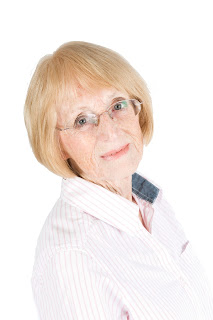 Most women had endured six years of war work and being entirely responsible for their children. Sometimes children were sent away as evacuees, so there would have been no family life. Women became much tougher as a result of doing men’s jobs, which didn’t always go down well. When their husbands returned they did not expect their wives to have gained so much freedom and independence. They had dreamed of the young and beautiful girl they’d married. Now she’d aged somewhat and that didn’t always appeal either. She could find herself dismissed from her job when the fighting men returned, even though she might be a war widow with no home or pension, or even a deserted wife. The government insisted she return to her wifely  duties, keeping house and producing and caring for children, which felt to some like going back to prison.

She also might have to deal with a shell-shocked or disfigured husband, who suffered from sleepwalking or nightmares, outbursts of violence or depression. He could have turned into a bit of a bully if he was accustomed to giving orders. He might also struggle to find work, or resent having to return to his boring desk job, finding it difficult to settle back into Civvy Street. Children too would often react badly as they didn’t even know their father, having rarely seen him.

But women too had suffered traumas. Perhaps remembered being buried alive for hours in a bombed-out house. The after effects might mean they couldn’t bear to go in lifts, sit in dark places such as a cinema, or experienced fainting fits or even heart attacks. She was most likely to be exhausted after the years of hard work, something their men folk didn’t always comprehend.

The effect of war upon a marriage or relationship was not always good either. Some couples were happy to be back together again and their love blossomed. Others were less fortunate, particularly if they’d suffered traumatic situations, or long periods of separation. It was often considered acceptable for men to satisfy their needs while fighting overseas and befriend girls, but complete fidelity was expected from wives. Why would a woman feel happy about that? And once back together, their personalities having changed somewhat, they could feel like strangers. This was particularly true of hasty war marriages.

When World War II ended there was a strange sense of anti-climax, as if the bright blue, sun-filled sky had clouded over leaving a feeling of uncertainty about the future. But then the country was in a mess, still enduring shortages and rationing, a lack of homes and jobs, and near bankruptcy. There were bombed areas and rubble everywhere, homes lost or wrecked, many empty shops, huge bomb craters everywhere, and loved ones lost. This was the brave new world that women had fought for, but not at all what they’d expected. They needed infinite patience, tact and strength to rebuild their lives.

Thank you, Freda! It hadn't struck me before, how peoples differing experiences of war could push them apart. It sounds a great idea for a novel. Oh wait....
G x 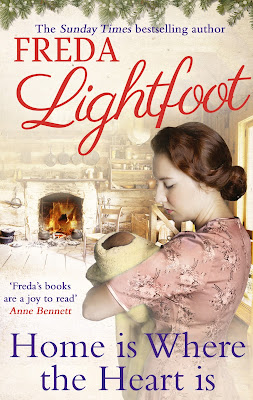 'Home is Where the Heart Is'  Blurb

1945: Christmas is approaching and Cathie Morgan is awaiting the return of her beloved fiancé, Alexander Ramsay. But she has a secret that she’s anxious to share with him. One that could change everything between them. Her sister has died and she wants to adopt her son. When the truth is finally revealed, Alex immediately calls off the wedding, claiming that the baby is actually Cathie’s, causing all of Cathie’s fears to be realised. As Cathie battles to reassure Alex of her fidelity, she must also juggle the care of the baby and their home.

But then Alex crosses the line with a deceit that is unforgivable, leaving Cathie to muster the courage to forge a life for her and her nephew alone.
Will Cathie ever be able to trust another man again and as peace begins to settle will she ever be able to call a house a home…

Freda's Bio:
Born in Lancashire, Freda Lightfoot has been a teacher, bookseller and in a mad moment even tried her hand at the 'good life' as a smallholder in the English Lake District. Inspired by this tough life on the fells, memories of her Lancashire childhood, and her passion for history she has published over forty sagas and historical novels. Freda has lived in the Lake District and Cornwall but now lives in Spain in the winter but still likes to spend rainy summers in the UK. 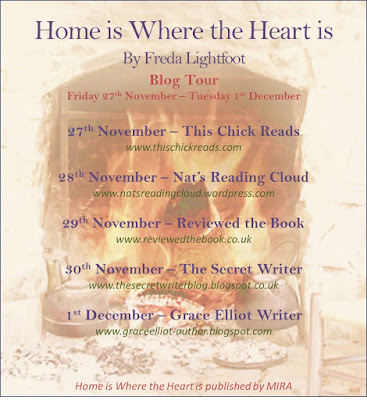 Email ThisBlogThis!Share to TwitterShare to FacebookShare to Pinterest
Labels: Freda Lightfoot, Home is where the Heart is.