Who is the Patron Saint of Cats?

Another possibility is Saint Mary Bartholomew Bagnesi. She lived in the 16th century and was a Dominican nun who suffered poor health. It seems cats liked Mary, and stayed with her in her sick room. Indeed, cats seem to be a sort of guardian angel for Mary.
“At least once when the cats knew Maria was hungry and hadn’t been looked after they went and fetched cheese for her to eat.” The Catholic Herald.

But no, Mary is not the saint we are looking for: Her area of patronage falls on the abused, the sick, and as a protector of parents.

In truth this is a trick question because there is no ‘official’ patron saint of cats, although St. Gertrude of Nivelles unofficially holds the honor. Gertrude is the patron saint of travelers, gardeners, and protects against mental illness…and rats. The latter is possibly where her associated with cats began.
Many pictures of Saint Gertrude show her with a mouse on her staff, which is where it all gets a little confusing. 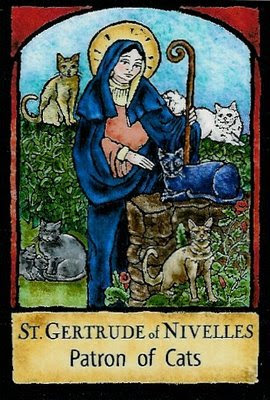 Whilst she was said to protect against rats and mice, the mice shown with her in pictures are said to represent the souls of the recently deceased in purgatory (whom she is also patron saint of). Whichever way round things are (mice good or mice bad) it seems Gertrude was kind to all the cats in the convent gardens, and cats were encouraged there in order to keep the vermin population under control. 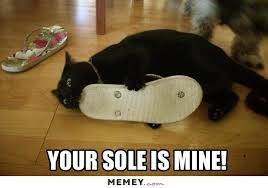 Gertrude was born in Belgium, in 626, and died aged 33, in 659. However, it wasn’t until the Middle Ages that she popularly became linked to cats, so perhaps it was more wishful thinking than fact, to put right a wrong that cats should have their own saint. 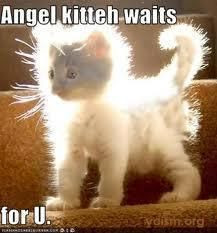