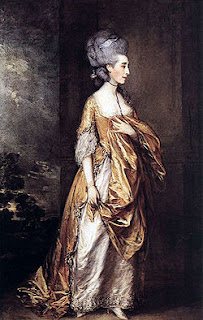 Grace Dalyrmple Elliot  1754 -1823
'Dally the Tall.'
My namesake, Grace Elliot, was an extraordinary woman with an instinct for self preservation. She witnessed the events of the French revolution, was mistress to a cousin of LouisXIV, was arrested and sentenced to be guillotined but after a last minute reprieve went on to write a fascinating account of her adventures; 'Ma Vie Sous La Revolution.'
Grace was born in Scotland and her parents were unusual in that they separated early and sent Grace to be educated abroad at a French convent. As a young woman she returned to England and was described as being 'Tall, with striking features, an appealing figure and intelligent.' She went on to use her formidable charm to ensnare an elderly doctor, Dc John Elliot, who just happened to mix in royal circles.
Their marriage was a disaster. Lively young Grace became bored with her dowdy husband and quickly took a lover, Lord Valentia. Although Valentia was of; 'Athletic form and agreeable countenance' he was also the archetypal love rat and abandoned Grace at the first hint of trouble. When Dc Elliot found out about the affair he sued for divore, a messy business in the 18th century. To salvage her damaged reputation Grace's brother all but kidnapped her and despatched Grace back to the French convent. However he had reckonned without Grace's loyal admirers, one of whom, Lord Cholmondley, rescued Grace and brought her back to London as a courtesan.
It was around this time she had a brief affair with the Prince of Wales and bore a daughter, Georgina Frederica Augusta Elliot, who she claimed was his. The Prince introduced her to the Duke of Orleans in 1784 and the couple moved to Paris, to become embroiled in the events of the French revolution.
In 1793 the Duke was executed and Grace was imprisoned under sentence of death for assisting aristocrats to flee the country. Luckily, she was freed after Robespierre's death and returned to the safey of London.
Grace remained a successful courtesan to the end of her life, dying in 1823 as the mistress of the mayor of Ville d'Avray.
Further information about Grace Elliot (old and new!) can be found on my website.
http://www.graceelliot.webs.com/
Posted by Unknown at 02:36