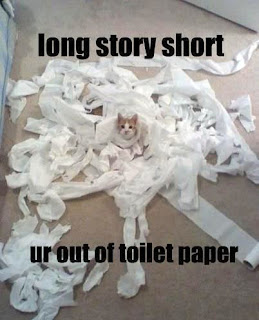 Where did the expression, 'to spend a penny', come from?

What has 'bumf' to do with toilet paper?
What is the origin of the word, 'sewer'?'


Exiting Bank tube station, you emerge from into the daylight within sight of two of 's grandest landmarks: The Bank of England and the Royal Exchange. Both are immense and breathtaking, and are also associated with some most unusual history. Today's blog post takes inspiration from the Royal Exchange and its lavatorial connections.


Did you know that the first public conveniences to charge were sited beneath the Royal Exchange? The fee was one penny - hence the euphemism: "To spend a penny."  Use of the urinals was free, but a stall-door was unlocked by a coin-operated locking mechanism designed by magician and illusionist, John Nevil Maskelyne.

However, the subject of alerting people to the location of 'public waiting rooms' (another euphemism!) for gentleman was considering so uncomfortable, that it was unthinkable to advertise a 'ladies'. It wasn’t until many years later that the first 'ladies' sign appeared on streets.


Public conveniences had been around for centuries before this. Perhaps the most well known medieval example was the 'House of Easement' or 'Long House'. This boasted 128 seats in two rows (one for men, the other for women) and was erected by the Mayor of London, Richard Whittington (of pantomime cat fame) in 1419. Use of the toilets was free but no toilet paper was provided. Boys patrolled up and down the ranks of toilets selling torn up pamphlets or 'bum fodder' and it is from this that the word 'bumpf' originates.
This 'House of Easement' had the simplest flushing system of all - the tide! Built over the banks of the , the tidal river swept the refuse away out to sea, the journey from riverbank to open water taking between three and eleven weeks. In fact, the word 'sewer' is derived from the 'seaward' i.e. taking the excrement to the sea!

The 'public necessaries' beneath the Royal Exchange were built in 1854 in response to a Public Health Act. The man responsible for their design, George Jennings, declared:


"The civilisation of a people can be measured by their domestic and sanitary appliances."


publically crusading for more public toilets which he called 'halting stations.'
A pioneer of water closet construction, his rival was the perhaps more well-known Thomas Crapper, whose name has long since become synonymous lavatories. Indeed, at this time there were thousands of Victorian toilet patents, of which Crapper held just nine. But it was who installed a splendid gentlemen's lavatory system in John Wesley's Methodist chapel.

In one of his famous sermons, Wesley exhorted the congregation that:
"Cleanliness is indeed next to Godliness,"
Which must have been music to ears as he designed ceramic urinals with a helpful bull's eye target, hand basins dressed with marble and wooden cubicles not unlike confessional boxes? The porcelain handles on the pull chain were adored with the helpful instruction, 'pull and let go', perhaps an exhortation to cleanse the soul as well as the body.
Posted by Unknown at 02:46