Which tube line has the longest route?
What name was originally proposed for the Jubilee Line?
Which was the first station that used kestrels to scare away pigeons?
Which is the only tube station not to have letters of the word "mackerel" in it?
[ANSWERS at the end of the post.]

10 January 2013 marks the 150th anniversary of the opening of the London Metropolitan Railway, and the birth of 's modern tube network. The world's first underground passenger railway took 2,000 workers, 3 years to dig over 3.5 miles of track to link Paddington, Euston and Kings Cross to 's business district.

"London Underground was the first transport system of its kind, embodying the engineering ingenuity of our Victorian forefathers and providing a template for similar schemes around the world."
Mayor of , Boris Johnson.

Those first Victorian trains sound even more uncomfortable than their modern counterparts; the carriages were windowless and lit by gas lamps, and soon earned the nickname 'padded cells.' Added to that, steam powered trains and poor ventilation meant passengers and drivers alike, frequently complained of feeling ill during their journey.
In the 19th century as 's streets became ever more congested, a solution had to be found for getting around the city. The idea of an underground railway was hit on and work started in 1860. The early construction technique was 'cut and cover'. This is just as it sounds: navvies dug a deep ditch which was braced and roof, and covered over to form a tunnel. This work was hugely disruptive as whole streets had to be closed and extremely dangerous for the workers.
A step forward was made with the invention of a tunneling device called, 'the shield'. Inspired by an engineer who observed how a worm chewed through wood, the shield was so called because it protected the men working behind it. However, it was not a sophisticated structure so much as an iron frame with pockets for workers to stand in with their shovels. Their excavations were then reinforced with brick and iron and the shield jacked forward. With modern technology it takes just a week to create what would have taken the Victorian's a year.
Another improvement in technique was made when James Greathead, with co-worker Barlow, developed a mechanised shield. This was a circular device,  2.21m in diameter which was inched forward by hydraulic jacks, and as the ground was excavated the exposed surface was lined with curved metal ribs. The basis of this design is still the foundation of most modern tunneling devices used today.

Have you traveled on the underground either in , or abroad?
What was your experience?

Quiz answers.
Which tube line has the longest route?
This is the Central line; over 34 miles of track covers the distance from to Epping.

What name was first proposed for the Jubilee Line?
It was originally going to be called the Fleet Line.

Which was the first station that used kestrels to scare away pigeons?
This was Northfields, on the Piccadilly line, which used hawks and kestrels to deal with a pigeon problem.

Which is the only tube station not to have letters of the word "mackerel" in it?
Wood - of course! 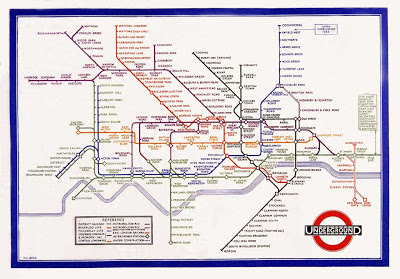 Did You Know?
The iconic London Underground map was created in 1933 by Harry Beck. He was paid just five guineas for the design, which is still in use today.

The font used on London Underground signage was designed in 1916 by Edward Johnston.

Originally the boundaries of the tube network were limited by the extent of clay, an excellent substrate to tunnel through.
Posted by Unknown at 02:30