Turnspit Dogs : Every Dog has his Day

“How well do I recollect, in the days of my youth, watching the operations of a turnspit at the house of a worthy old Welsh clergyman in Worcestershire, who taught me to read.”
Anecdotes of Dogs, Edward Jesse, 1870
This week’s blog post is about the ‘Turnspit’ dog – a breed now extinct. It was the purpose of these dogs to run inside a wheel which in turn powered a spit used to roast meat. Prior to this automation  roasting meats had to be turned by hand which was both labour intensive and unreliable. The invention of a dog-powered device was hailed as a great improvement.
“A dog…by a small wheel, walking round it and making it turn in such a manner that no cook or servant could do it more cleverly.”
Johannes Caius – 1576 – Royal physician and dog expert. 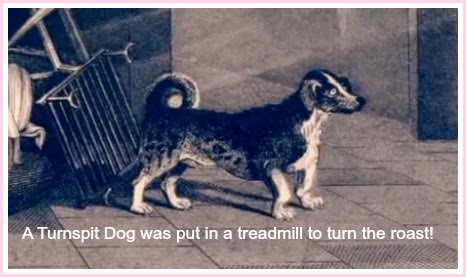 In the mid 1700’s Carolus Linnaeus mentions a breed of turnspit dog and later still, Charles Darwin mention their short legs as an example of genetic selection. Since the dogs had to work in a confined space short legs and heavy bodies gave them an advantage to turn the wheel. In France the breed were described as ‘Basset a jambs torses’ and pictures show a short-legged dog with a long heavy body somewhat similar to the modern Basset Griffon Vendeen.
“The Turnspits are remarkable for their great length of body and short and usually crooked legs. Their colour is generally a dusky grey spotted with black or entirely black with the under parts whitish.”
Bingley’s Memoirs of British Quadrupeds 1809
The work was hard, hot and lacking in stimulation. Whereas other working breeds had the thrill of chasing rats or pointing out game, the Turnspit dog did his work out of compulsion and a likely scolding if he slacked in his task.
“The poor animal…went about his employment like a caged mouse or squirrel with his recreation wheel…revolved in a treadwheel, which in this instance was connected with apparatus for turning the joints roasting at the fire and formed not so much recreation as extremely hard work.”
Charles G Harper – The Old Inns of England - 1906
Numerous stories exist of dogs evading their work, as mentioned by a Mr Wigstead, when writing about a pub in Newcastle where he observed:
“Great care must be taken that this animal [the Turnspit dog] does not observe the cook approach the larder. If he does, he immediately hides himself for the remainder of the day.”

In a large household where particularly heavy joints of meat were roasted, often two dogs were used, each alternating for a few hours in the wheel, or else worked on a ‘day-on-day-off’ basis. These animals soon became accustomed to this routine and if called upon to work on a day other than his usual, would hide away. Indeed, this regime is thought to be the origin of the phrase “each dog will have his day.” 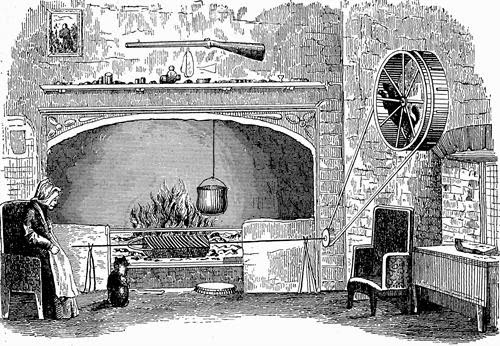 Whether as testament to a dog’s intelligence or the drudgery of the work, other stories are recorded, such as that told of the kitchen of the Duke de Liancourt who had two dog-powered turnspits, used alternately. One day the ‘working’ dog went missing and so his companion was forced to work two days in a row. At the end of his duty, by wagging and whining, the dog took the kitchen staff to where his lazy companion was hiding and flushed him out.

A similar tale exists of a cook who couldn’t find the dog whose turn it was to work the spit and so attempted to put his favourite dog in the wheel. This dog rebelled and ran into the garden, found the missing dog and drove him inside where the latter went of his own accord into the wheel.

'With eagerness he still does forward tend,
Like Sisyphus, whose journey has no end.'
- anonymous poem, Upon a dog called Fuddle, turnspit at the Popinjay, in Norwich
Even when not working in the kitchen, Turnspit dogs were put to other purposes. An old story exists of some turnspit dogs from Bath, who on cold Sundays were taken to church to be used as foot warmers. However, on one occaision this backfired whilst the Bishop of Gloucester gave his sermon and sited the line “It was then that Ezekial saw the wheel…”. On hearing the word “wheel” the dogs ran off, associating it with work to be done!

However, not everyone was oblivious to the hard lot of the turnspit dog. In 1866, Henry Bergh, founder of the American Society for the Prevention of Cruelty to Animals, sited the dogs’ treatment as tantamount to slavery. He abhorred how the dogs were forced to trot for hours next to a blazing fire, with no access to water – and if they were tardy about their task the cook might even toss a hot coal onto the treadmill platform to enliven their paws.
And finally, on a brighter note, in Robert Chambers 1869 “Book of Days” he recounts an anecdote about an 18th century ship’s captain. When the captain docked at Bristol he became angry with the locals over their lack of hospitality to his crew. In retribution, under cover of darknes he sent his men to steal all the town’s turnspit dogs. When the roast meat was all gone and the crisis became acute, the townsfolk apologized, opened their doors to the sailors and the dogs returned.

Email ThisBlogThis!Share to TwitterShare to FacebookShare to Pinterest
Labels: every dog has his day, roast meat, turnspit, Turnspit dogs