The Sinking of the Mary Rose: by guest author, Judith Arnopp

I'm delighted to welcome Judith Arnopp, historical fiction author, to my blog. I've read three of Judith's books (The Winchester Goose, The Concubine's Kiss, and now Intractable Heart) and can heartily recommend them to readers of well-written historical fiction. With impeccable research, Judith's writing immerses you in the Tudor period and excels at making the motivation of the characters believable.
Today, Judith shares a post about the sinking of the Tudor warship, the Mary Rose (see excerpt at the end of this post to  read the scene in Intractable Heart). Anyhow, enough from me - let me hand over to Judith.
Grace x
PS For more Mary Rose info click the link.
On July 19th 1545, with the loss of more than 400 lives, the royal flagship The Mary Rose sank beneath the waves, settled into the silt of the Solent and became history. Four hundred years later, in 1982, when archaeologists successfully raised her from the seabed, I was watching. I may have been glued to the television screen 70 miles away from Portsmouth but, in my heart, I was there with the team, experiencing one of the most profound moments of my life. 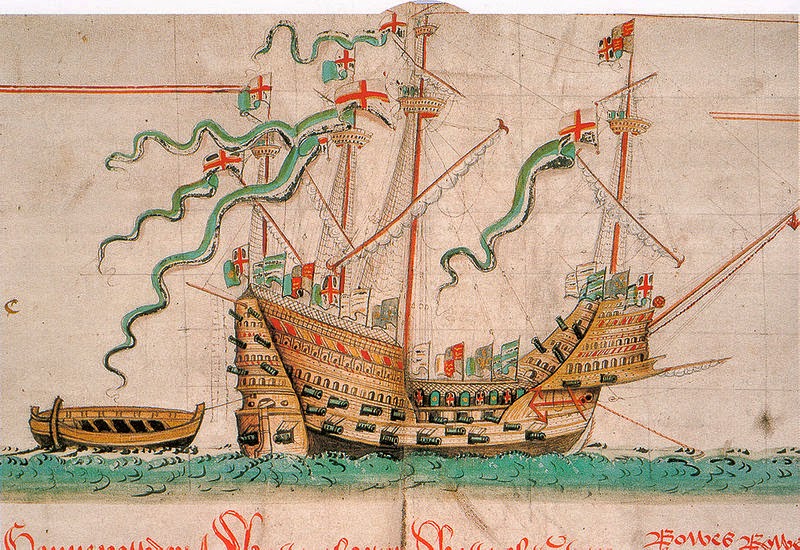 In the intervening years I have visited the museum several times and closely followed the Mary Rose Trust in its unstinting efforts to salvage not just the wreck, but the thousands of artefacts found alongside it.  For the past nineteen years the timbers of the wreck have been constantly sprayed with polyethylene glycol to preserve and reinforce the structure, but now the time has come to turn off the spray and begin drying her out. It is also time for the wreck and its artefacts to be brought back together and housed in one fabulous exhibition. 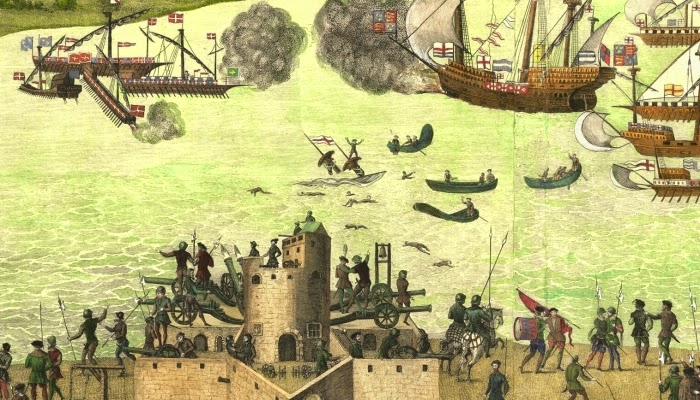 The Mary Rose is the only 16th century warship on display anywhere in the world. She offers an invaluable resource for historians, illustrating in minute detail, life as it was on a Tudor warship. Artefacts that, in normal circumstances, would have been lost to us have been preserved for 500 years in the Solent silt. They can now be viewed in situ in a new museum which opens in Portsmouth in May 2013. Visitors to the museum will be able to walk along a central gangway and view the original wreck on one side while, on the other side, see a reconstruction of how experts believe the interior of the Mary Rose may have looked on the day she sank.
Henry VIII’s obsession with France left England a legacy of isolation in Europe, religious conflict, inflation, national penury and social upheaval, and what little gains he did make were short lived. In the 1550’s Boulogne was given back to France, and in 1558 Calais, England’s last possession on the continent, was lost. Today we can see that the one positive outcome of his war with France was the Mary Rose. What was undoubtedly a huge loss to Henry VIII that day but she has now become a gift to us as a nation, and every single person who went down with her did not die in vain. They are not forgotten. The wreck of the Mary Rose provides precious insight into life on a Tudor warship, an aspect of 16th century life that would otherwise be completely closed to us.
It is not just the salvaged cannon or the armour and weapons that are invaluable, it is the small, everyday things. They have become the greatest treasures. There is no thrill on this earth like looking at a handful of dice last thrown by a sailor in 1545, or a leather shoe last worn by a man defending our shores from French invasion five hundred years ago, or a nit comb still thick with 16th century lice. To me, and other peculiar people like me, those things are rarer, and more thrilling, than the crown jewels. 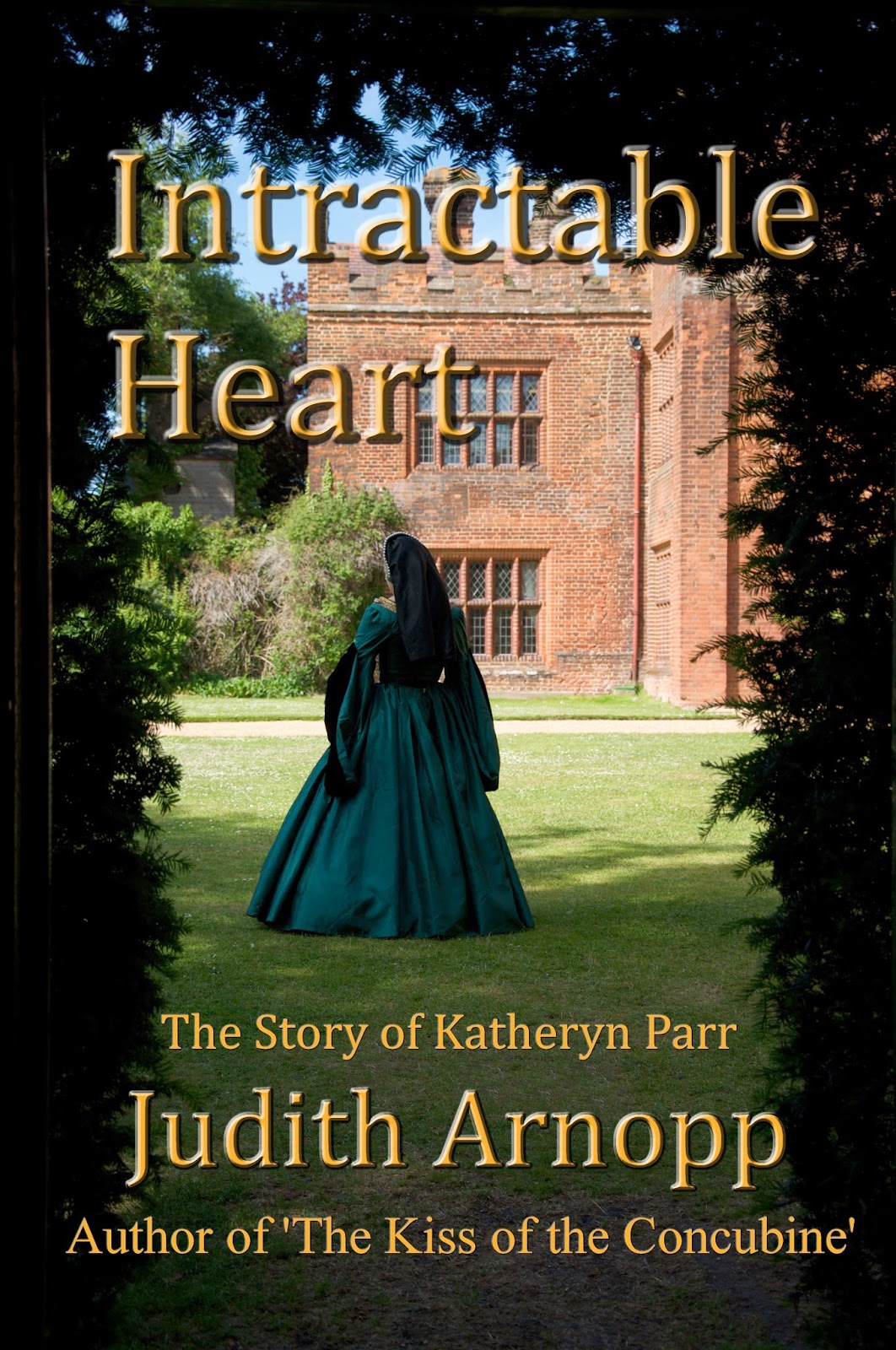 When I came to write my novel Intractable Heart; a story of Katheryn Parr I could not omit the tragedy of the Mary Rose. We do not know for certain if Katheryn was with Henry as he watched his favourite ship sink but it is not beyond the bounds of possibility that she was. Below is an excerpt from the novel depicting the imagined scene.

The King points a finger, indicating where the ships should go next. Beside him, ignoring the squeals of the women, Charles Brandon nods.  It is as if the men are witnessing a life sized game of chess, as if real lives, real husbands aren’t at risk. I remember Henry explaining that there are more than four hundred and fifty men aboard each ship. I try to imagine the squash, the stench and the squalor. It must be like hell on earth.
The king stands proud, hands on hips, his demeanour belying his failing breath, his crippled leg, his lack of virility. He looks out across the sea, his papery cheeks growing pink in the sea air, the white feather in his cap fluttering like a stricken gull. Slowly, the pride of the English navy turns to offer a broadside attack.
It is one of those briny coastal days when the wind is sporadic, with intermittent breezes that extinguish the warmth of the sun. A sudden gust, seemingly from nowhere, lifts the King’s cloak, making him shudder.
“Someone walking over my grave,” he laughs as he wraps it closer to his bulk. He glances at me and I smile dutifully, convincing him of my adoration. And, engaged as we are in this moment of marital insincerity, we both miss the precise moment when the Mary Rose falters.
When we turn back to the panoramic scene, the action is stilled; the flags on the great ship snap and flutter. Like a painting the scene is frozen momentarily, the great ship balanced on the cusp of fate. As if in premonition the king holds his breath, grabs my arm as my heart falters and I send up a prayer.
But, in a heartbeat, the ship is heeling over, cries of terror as her open gun ports fill with water. We stand amazed as the first sailors fall from the rigging to splash into the sea. On the snapping breeze the screams of the stricken men are borne toward us and my husband’s prowess instantly shrinks. His breath whistles from his lungs, his grip is tight and painful on my wrist.
We watch transfixed as the massive cannon break free, bursting through the sides of the ship, surging into the waves. All around us people are screaming, shouting orders; a crowd surges toward the dockside, the air clamouring with terrified voices.
On board The Mary Rose the tilting deck is a chaos of fleeing men. They are screaming, leaping from assured death to certain drowning. As they run, they cast off their clothing, kick off their shoes in the futile hope that, although they cannot swim, they will float when the swiftly swelling sea engulfs them.
The end is quick. Henry and I watch in horrified silence while around us on the battlement, women are weeping, wailing, praying. Charles Brandon and Anthony Browne are shouting, waving their arms. Below us in the precinct men are fighting to mount terrified horses, although it is too late for fruitful action; there is nothing to be done.
It is far too late to prevent disaster. Henry knows it in his heart. I know it in my own. Now, so quickly, the only visible sign of Henry’s favourite ship is the top of the mast jutting from the water. Like a great white jelly fish the mainsail is foundering in the waves and only a few survivors are left, clinging to the fighting tops. The balmy sea is littered with the wreckage, and the remnants of his fighting crew are flotsam.
I am suddenly aware of someone sobbing and slowly I turn in a daze to find Mary Carew fallen to her knees. It is only then I remember her husband. Before I can move to comfort her Henry stumps forward and, throwing down his stick, he lifts her up and draws her into his arms.
He wraps his arms about her and over the top of her head his eyes meet mine. There are great shining tears on his lashes, dropping onto his white and sagging cheeks.
“There, there,” he croaks, caressing her shoulder awkwardly with his jewelled hand. “There, there.”
What else can he say?

Intractable Heart is available now on Kindle please click here to read a sample.
The paperback edition will be available toward the end of the summer.

Judith Arnopp’s other books include:

The Kiss of the Concubine: A Story of Anne Boleyn
The Winchester Goose: at the court of Henry VIII
The Song of Heledd
The Forest Dwellers
Peaceweaver

All available both in paperback and on kindle.