The Great Seducers - The RAKE. 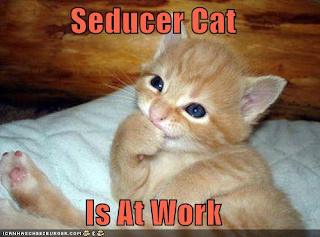 "The Rake burns with a desire that enflames the woman his is seducing."


Rakes did not offer mild excitement, but something rare and thrilling, something worth taking a risk for. Added to that, that the resistance of his prey is only a vehicle for the rake's creativity and he becomes almost irresistible, for even his dangerous reputation adds allure as his quarry wonders if she will be the woman to tame him.
One such rake was the notorious Fronsac, Duke de Richelieu, (his grand-uncle became Cardinal Richelieu, featured in The Three Muskateers.)As a 15 year old, he charmed the ladies at the court of an elderly Louis XIV. After overstepping the mark with a duchess, an irate King sent the young Fronsac to cool his heels in the Bastille. Years later he used his dangerous reputation as a seducer and heartbreaker to draw women to him.

One such woman was the young Mademoiselle de Valois, who one day was walking in a park with her chaperone. De Valois' father guarded her obsessively and employed a sour, unimpeachable woman as her constant companion to deterr undesirable admirers. On the walk a young man caught her eye with one smouldering look. This man was, her guardian told her, the now infamous Duke de Richelieu.
Days later, in a different park passed de Valois again, but this time disguised as a beggar. However his smouldering intensity could not be hidden from de Valois. He represented excitement in her drab routinue, and that of all the beautiful ladies, he had chosen her to pursue added an extra piquancy to her sheltered life.
Richelieu smuggled notes to her, which expressed his uncontrollable infatuation, and she responded. The Duke, eager to spend a night with de Valois, even dressed as her maid to gain entry to her bedchamber. She begged him to leave, but his personal attraction overcame her resistance, she forgot all reason and gave in. to desire.
"If I believed in sorcery I should think that the Duke possessed some supernatural secret, for I have never known a woman to oppose the very least resistance to him."
The Duchess d'Orleans ( Mademoiselle de Valois' mother.)
When de Valois' father increased security around his daughter,  took this as a challenge. Under an assumed name  he bought the adjoining house and cut a hole through the wall into his neighbour's kitchen cupboard. The trysts between Richelieu and de Valois continued…until he grew bored with her and moved on....

's exploits  with women were notorious and yet he even turned this to advantage. What knew was that intense desire has a distracting effect on women. A woman is often suspicious and can sense insincerity, but when the rake is inflamed for her and will brave danger and breech any barriers to get to her, she is more inclined to overlook his other shortcomings. So long as he seemed the slave to her charms, the woman would not think of the aftermath.
"What a man! What a man! He is astonishing! How often you could be happy with him if he were only faithful."
Madame Renaud.
So, if you were going to caste a movie featuring a rake, who would make the perfect leading man?
Do leave a comment and share your thoughts!

NEXT WEEK: The Ideal Lover.