Regency Panes - Why Windows Are More Interesting Than They Appear.

﻿﻿
﻿﻿   This week I discovered a wonderful book, ‘Regency Style’ by Steven Parissien, and the chapter on windows is especially fascinating. For instance, did you know that the ‘bottle pane’ windows associated with old-fashioned bow windows were NEVER used at the front of a house and this glass was a fire hazard? (More about this, later.)
In the 18th century there were two methods of producing glass.
Crown Glass.
The best quality window panes were made from crown glass. To make this, a globe of molten glass was blown and then flattened on a bed of sand into a disco some five or six foot in diameter.

“…a loud ruffling noise, like the rapid unfurling of a flag in a strong wind.”
Contemporary description of crown glass being blown.

The blowing rod or ‘pontil’ was cut from the disc, and once the glass had cooled a little it was cut into panes measuring ten by fifteen inches.
Muff Glass.
Panes of an inferior quality were made by swinging the molten glass was swung over a sand pit until it formed long cylinders, these were then cut open, flattened out and cut to size.
Window Glazing.
The limitation of manufacturing flat panes of glass restricted their size, and this is where glazing came in. The typical Georgian or Regency window had a sash treatment, described as ‘Eight over eight’, ‘six over six,’ or ‘four over four’, depending on how many panes were used.


Apparently the workmanship of these windows was much admired, according to one contemporary report (quoted below.)
“Nothing surprised me more at first, than the excellent workmanship of the doors and windows; no jarring with the wind, no currents of air, and the windows, which are all suspended by pulleys [sash windows] rise with a touch.”

Window Myths.
When thinking of Georgian shops, many of us conjure images of sweeping bow front windows with bottle glass panes. Actually, these were very rare.
Firstly, the bow windows weren’t allow to project more than ten inches into the street (1774 Building Act), and less so in narrow lanes. Secondly, bottle or bullion glass (the knobbly pane left when the pontil was removed during crown glass production) was never used on a front elevation. 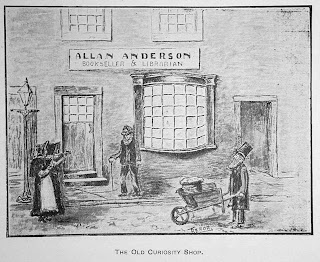 Bottle Glass.
Lumpy bottle glass was considered inferior and used out of sight, such as in rear of a building, north facing windows, or kitchen basement windows. Partly this was because the glass was unsightly, but mainly because it was a fire hazard! The indentation focused the sun’s rays, in the much the same way as a magnifying glass, and the unwary risked their curtains being set alight.
A revolution in glass making – plate glass.
In 1832, Lucas Chance revolutionized glass making with an industrialized process he imported from the continent to use in his factory in Stourbridge. This allowed for the manufacture of larger and more uniform panes of glass…such as were used in The Crystal Palace in 1851….[for trivia about The Crystal Palace and The Great Exhibition see my next blog post, this Sunday.]
Posted by Unknown at 09:15