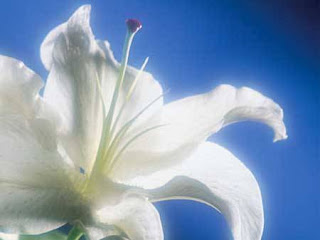 In Greek legend lilies were formed from the spilt breast milk of the goddess Hera when she was tricked into nursing the infant, Heracles. The babe was pulled from her breast and some of the milk stained the heavens as the Milky Way, whilst part fell to earth as the lily. The flower was seen as a symbol of fecundity and purity and in ancient cultures brides wore a crown of lilies woven with wheat, to bring the blessing of fertility to the marriage.
﻿﻿


﻿﻿
The lily also has a number of associations in Christian legend. The first was that lilies came about from Eve's tears in the Garden of Eden. Later on the flower had other associations, such as representing the Virgin Mary's tears or to have arisen from Jesus' sweat the night before his the crucifixion, and are therefore a symbol of resurrection. It is because of this that many churches are decorated with lilies at Easter time.


Intriguingly, the ancient Roman's placed a lily in the hands of the deceased when they were buried, to signify rebirth. This tradition was adopted by the early Church but later became corrupted as a Christian symbol of death. Because of this association it is considered bad luck to bring lilies indoors. However, if you are an animal lover, more specifically a cat owner, it is worse than bad luck to have lilies in the house, it can be fatal to your pet.


When a cat brushes past a lily, the pollen is readily transferred to her fur. When the cat grooms herself and ingests the pollen, she is unwittingly poisoning herself. The pollen is 'nephrotoxic', or damaging to the kidney, and will rapidly send her into renal failure. If your cat has contact with lily pollen, immediately wipe her coat with a damp cloth to remove as much as possible, stop her licking her fur and then phone your vet for advice.