Walking the Plank - Fact or Fiction? 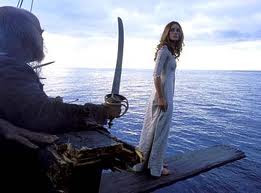 Walking the plank is described in J.M Barrie’s children’s classic “Peter Pan” and also featured in the “Pirates of the ” movies, but did it happen in reality? Did pirates force their hostages to ‘walk the plank’; after all, wouldn’t it have been easier just to toss unwanted visitors overboard?
But what evidence is there to back up the myth?


As David Cordingly, curator of the and author of “Under the Black Flag” points out:
“There are no written accounts in the 17th and 18th century of walking the plank, and so historians largely dismissed the practise as the fanciful product of fiction writers.”
However, Plutarch, the first century Greek historian, writing in his work “Life of Julius Caesar” tells a fascinating story of a young Julius Caesar being captured by Cicilian pirates. In his account the 18 year old Caesar was:
“…was taken near the island Pharmacus by…pirates, who, at that time, with large fleets of ships and innumerable smaller vessels infected the seas everywhere.” 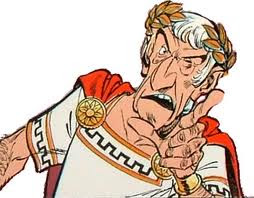 Plutarch goes on to recount how the captive Caesar was held to ransom and threatened with being made to walk the plank. What is also interesting is what an irritating hostage Caesar made; apparently he disagreed with his captors who wanted a ransom of twenty talents, he argued he was worth at least fifty!
Caesar’s ransom was paid and he was released…only to return in force to capture those who had previously held him and order them crucified. Apparently, after this episode pirates would always;
“Bow low and tender their most humble services”
To all Roman captives, then politely ask their victim:
“To mount upon the ship’s ladder and step to liberty…into the sea.”
Of course, part of the terror of walking the plank was that few sailors could swim, as outlined in a 19th century article in ‘Macmillan’s Magazine.’
“Many of our English sailors cannot swim. Many gentlemen in various professions, to whom that accomplishment would be not only useful, but perhaps absolutely necessary, as equally ignorant of it.” 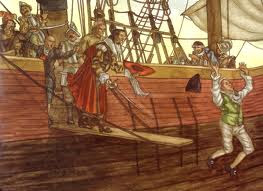 In the 19th century several accounts of ‘walking the plank’ exist such at in 1822 pirates capturing the Jamaican sloop, ‘Blessing’. The unfortunate Captain, William Smith, could only offer flour and cornmeal, instead of coinage and so:
“A plank was run out in the starboard side of the schooner, upon which the pirate chief made Captain Smith walk…they then tilted the plank, then he dropped into the sea.”
It seems Captain Smith was one of the few sailors who could swim…not that it did him any good since seeing their captive strike out to sea; the pirates shot him in the head! 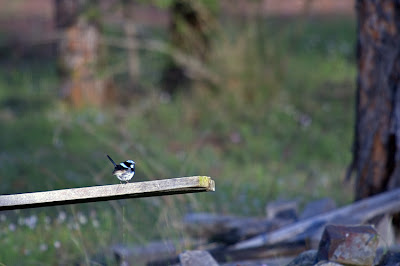