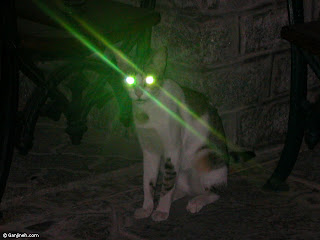 The invention of the reflective road stud widely known as the ‘Cat’s Eye’ was inspired by a near miss in 1933 when Yorkshireman, Percy Shaw, whilst driving in thick fog swerved to avoid hitting a cat. The reflection of the car’s headlights hit the back of the cat’s eye and alerted him in a nick of time. Perhaps even more significantly, the cat was standing near a dangerous bend in the road that led to a sheer drop over a cliff - so not only was the cat’s life saved, but very likely Shaw’s.

After this near death experience it became Shaw’s mission in life to develop a light-reflecting warning for roads and in 1935 he started his own company, “Reflecting Roadstuds Ltd.”   Shaw’s other innovation was the mechanism (again the inspiration drawn from actual cat’s eyes) whereby the glass was embedded in a moveable holder which depressed into the road when run over. This pushed the lens against a rubber coating which wiped it clean; much like a cat’s eyelid does against the cornea. To ensure fairness, The Ministry of Transport held a competition for rival designs but after two years Shaw’s were the only ones still in one piece or not silted up with road dirt. 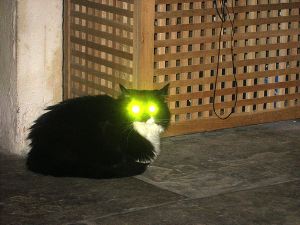 As far back as classical , a cat’s eyes were worthy of note.  The goddess Bast, also called Bastet, is widely known today as the “Cat Goddess. Legend has it that, by day, Bast would ride through the sky with her father, the sun god Ra, his boat pulling the sun through the sky. But by night, she transformed herself into a cat (renown for its superb night vision) to guard her father from Apep (also known as Apophis), a serpent who was her father's greatest enemy. 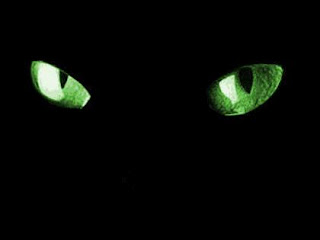 Even in the middle ages, the properties of cat’s eyes were recorded as in this excerpt from John Bessewell’s book from 1597:
“He [the cat] is sly and willie, and seeth so sharpely that he overcommeth darkness of the nighte by the shynigne lyghte [shining light] of his eyne [eye.]” 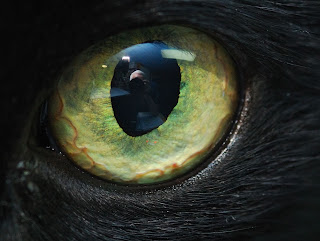 In 1868, Charles Ross enlightened (excuse the pun) readers of his work, “The Chit Chat Book of Cats” with an explanation of the workings of a cat’s eye.


“The illumination of a Cat’s eye in the dark arises from the external light collected on the eye and reflected from it. The cat is furnished with a bright metal-like , lustros membrane, called the Tapetum, which lines part of the hollow globe of the eye…this membrane is especially beautiful and lustrous in nocturnal animals.”
Modern science tells us that the lustre is due to a high percentage of rods in the retina - which are especially sensitive to light, but Mr Ross’s description perfectly describes the qualities of Shaw’s cat’s eye invention! 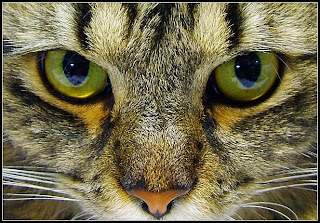