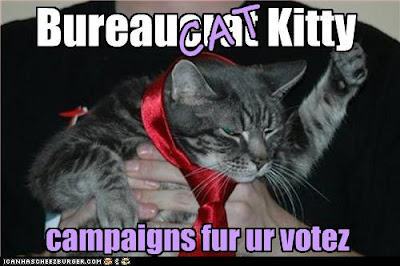 With the American primaries constantly in the headlines, even here in the UK,  it made me think about the importance of democracy and voting, and so this week's blog post is the controversial story of Emily Davison, and her fight to win the votes for women. 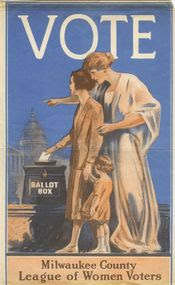 In a hundred years ago most men thought women couldn’t understand how Parliament worked and therefore they were not allowed to vote. So in 1897 Millicent Fawcett started a peaceful campaign for 'Votes For Women'. In 1903 a more militant organisation, known as the 'Suffragettes' was created by Emmeline Pankhurst. 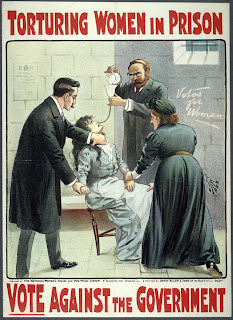 The Suffragettes were savvy about getting attention, which eventually ended in tragedy for Emily Davison.

In Edwardian Britain, Emily Davison was a woman ahead of her time; she defied convention in a male dominated society and graduated from London University, and then went on to study at Oxford, where she gained a first class honours degree. But Emily was angered by inequalities she saw around her and was determined to do something about it.
To get publicity for the cause of women's suffrage, Emily ran onto the race track during the 1913 Epsom Derby, and threw herself at the king's horse, Anmer. Tragically, she was trampled and died of her injuries.
The Suffragette's claimed Emily as the first martyr to their cause and later Emmeline Pankhurst wrote that Emily had decided only the loss of life would:
"...put an end to the intolerable torture of women."

In tribute to Emily's belief in votes for women, her gravestone was inscribed:
"Deeds Not Words."
In reality Emily Davison's death so horrified the politicians that they argued if an educated woman such as Emily, could act to irrationally, what bedlam would British society be plunged into if less educated women were allowed the vote?
However, not everyone agreed Emily intended to kill herself and some argued that Emily's death was actually an accident. The royal jockey, Herbert Jones made it known that he didn’t think Emily meant to harm herself. He was haunted by the look of surprise seconds before the collision. His theory was that because of the deceptive undulations of the race track, Emily assumed all the horses had passed and merely intended to run onto the track to protest and draw attention, but a dip hid a bunch of stragglers, including his mount - with fatal consequences. 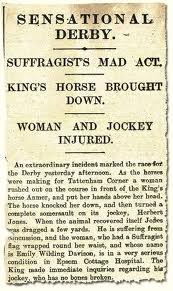 The question of whether Emily meant to kill herself was recently raised again when in 1986 some personal papers kept by the Davison's family solicitor came to light. Amongst Emily's personal effects was a return rail ticket from Epsom to , which would suggest she intended to go home that night…
"Deeds Not Words."


Do you always use your vote?
Is voting important to you? 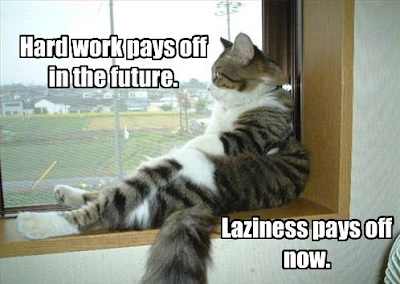