I'm delighted to welcome author, Freda Lightfoot, to the blog.

Born in Lancashire, Freda has been a teacher, bookseller and, in a mad moment, a smallholder on the freezing fells of the English Lake District where she attempted to live the ‘good life’. She has now given up her thermals to live in an olive grove in Spain, where she produces her own olive oil and sits in the sun. She began her writing career by publishing over 50 short stories and articles, and has published 39 novels including many bestselling family sagas and historical novels.
So without further ado, welcome Freda! 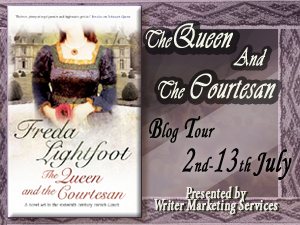 The Renaissance Betrothal.
Popular since the Middle Ages, betrothal ceremonies frequently involved some sort of ceremony or symbolic act. This is believed to date back to the time of ancient Rome. In Anglo-Saxon England the joining of hands to seal the betrothal was common as we know from the term ‘handfasting’ to signify a betrothal. In fourteenth and fifteenth century Italy, the betrothal was sealed by a handshake between the parents, or at best the father of the bride and the prospective groom. In sixteenth century France this ritual was known as les accords. There would be the giving of a ring, often a gimmel ring which was in two parts, one to be worn by the prospective groom, the other by the bride, the two joined together to form the wedding ring. Records indicate the drinking of wine to toast the agreement, or taking part in a sumptuous feast ‘in the name of marriage’, or simply be sealed with a kiss.

The betrothal ceremony confirmed that these two people promised to marry one another, an agreement which could be considered more legally binding than the marriage ceremony itself. Once betrothed, if a couple had sexual intercourse, then they were considered married. And a betrothal contract could only be broken if both parties agreed.
Not that the young woman concerned had much say in the matter. Marriage was less about love and more about wealth, position and power, which meant, as we romantic novelists know, plenty of opportunity for extra-curricular activity in the way of affairs. Henry IV is reputed to have enjoyed at least 60 mistresses with whom he sired numerous illegitimate children, and three or four maîtresse-en-titre. But with Henriette de’Entragues he perhaps took on more than he’d bargained for she had set her sights on nothing less than marriage, and with it a crown. She therefore insisted upon a promesse de matrimonio before agreeing to surrender her maidenhead, allegedly still intact, and becoming his mistress. In a weak moment of overwhelming desire, Henry agreed that if she could give him a son, then he would marry her. A decision which was to create untold problems in the years ahead, and leave Henriette fighting a battle for what she perceived as her rights, at whatever the cost.

Next came the fiançailles when the bans were published. The parents, bride and bridegroom would visit the curé together to attend to this important matter. Then came the Epousailles which of course took place in church. The bridegroom was not allowed to enter without giving a considerable sum in alms, and guests were chosen to attend the wedding breakfast with an eye to the money they’d be likely to give. A bowl was handed round at dinner into which donations for a ‘nest-egg’ for the couple could be dropped.
Henry left such traditions to the bourgeoisie, but provided well for all his children, whatever their status, and was a loving father. Those he had with Henriette shared the royal nursery with the legitimate heirs he had with his queen, Marie de Medici, much to that lady’s displeasure. But Henry loved to play with them, and it was so much more practical to keep them all together in one place. The people of Paris were highly entertained by the fact that his mistress and queen were often enceinte at the same time.

You can find out more about Freda and her work here:
The Queen and the Courtesan, published 29 June, can be found as a paperback or ebook her
http://www.amazon.co.uk/The-Queen-Courtesan-Freda-Lightfoot/dp/1847513972/ref=tmm_pap_title_0?ie=UTF8&qid=1338886284&sr=1-1
Most of Freda's titles are now available as ebooks on Amazon, Kobo, Smashwords etc. Links to them can be found here:-  http://www.fredalightfoot.co.uk