Of Rats, Rat-Catchers ... and Beatrix Potter!

This week’s post is on the unsavoury topic of rats – or more precisely, rat-catching. More significant than just scaring gentlewomen and spoiling food in larders, rats could do immense damage to crops in the field. And if the corn was destroy the price of grain (and thus, bread) rose, leaving the common man either hungry or broke.
In the past with mice and rats a part of everyday life, an animal that was good at killing such vermin was much prized. Cats are perhaps more traditionally associated with catching rodents, but this is not exclusively feline territory with terriers and some famous rat-catching dogs excelling at this skill as we find out later in this post.
In the early 19th century Charles Fothergill attempted to work out how many rats were rampant in London. He estimated that a breeding pair of rats could produce three million young during their three year lifespan and his nightmarish vision predicted:
“The whole surface of the earth in a very few years would be rendered a barren and hideous waste, covered with myriads of famished grey rats, against which man himself would contend in vain.”
To counter balance this scenario an efficient rat-killer could destroy around 8,000 rats a year. One such famous rat-catcher was a colourful character called Jack Black. He was well known in Victorian London from both his antics and self-made uniform of a scarlet topcoat, waistcoat and breeches, with a wide leather belt inset with iron rats.  A record of his work has come down to us as he was interviewed by the Victorian chronicler of London life, Henry Mayhew. It seems as a young boy Black enjoyed showed off his rat-handling skills in Regents Park.
“I wasn’t afraid to handle rats even then. It seem to come nat’ral to me. I very soon had some in my pocket, and some in my hands…I didn’t know the bites were so many, or I dare say I shouldn’t have been so venturesome as I was.”
However, Black’s motives for catching rats may not just have been to rid people of an infestation, because he also had a profitable side line in selling live rats to rat-baiting dens.  This was a popular pastime (I hesitate to say ‘sport’) in London taverns where dog owners set their dog in a pit and bet on how many rats they could kill. One such dog was Bulldog-Billy. His claim to fame was killing a hundred rats in five-and-a-half minutes, during a contest at Cock Pit, Duck Lane, Westminster. Billy’s owner spotted a business opportunity and charged the princely sum of £10 per mating for the dog’s stud services. Indeed, such was Billy’s fame that in 1814 Princess Charlotte, the Prince Regent’s daughter, bred her three tricolor toy spaniels with him!
The trade of rat-catching could be potentially lucrative in more ways than one. Whilst ridding a house of rodents, Jack Black told Mayhew of a stash of silver he found in the cellar.
“I found under on floor in a gent’s house a great quantity of table napkins and silver spoons and forks, which the rats had carried away for the grease on ‘em – shoes and boots gnawed to pieces, shifts, aprons, gowns, pieces of silk, and I don’t kow what not. Servants had been discharged, accused of stealing them there things. Of course I had to give them up; but there they was.”
Black spotted the opportunity for making money from his best rat catching dogs. He had a black and tan terrier who was second to none and reportedly the father of most of the similar looking terriers in London. Black reports selling one of the dogs to the Austrian Ambassador, and he was offered a sovereign per pound of body weight for his dogs, which Black declined as too mean a price. 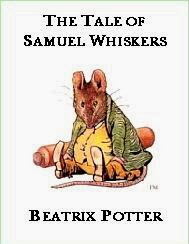 And finally, Black was very much poacher turned game-keeper as he was also partly responsible for establishing ‘fancy’ rats as pets. When he caught unusually coloured rats he bred them together to establish new colour varieties. He then sold these on as domesticated pets “To well-bred young ladies to keep in squirrel cages.” Beatrix Potter is reputedly one of his customers and dedicated her book Samuel Whiskers to her pet rat of the same name!
Posted by Unknown at 08:25