A Visit to the Georgian Court at Hampton Court Palace

The Georgians have arrived!

It is nearly 300 years since an obscure German prince, acceded to the English throne. As part of a raft of events to celebrate the start of this fascinating period in history, the clever people at Hampton Court Palace, have re-created what it was like to visit the Georgian court. 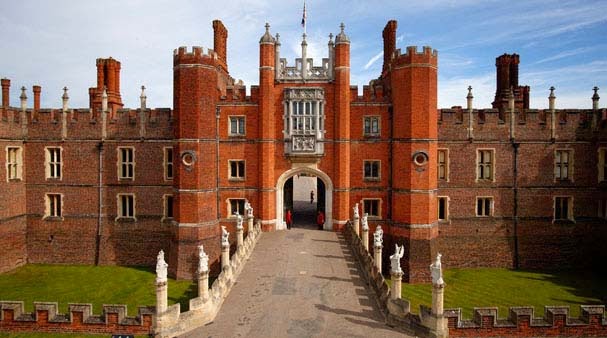 I was thrilled to be invited by the Historic Royal Palaces (the guardians of HCP) to preview the rooms, before they open to the public this Easter weekend. Within the Georgian court there were too many interesting stories to cover in one post, so let me start this week, with a tour of the rooms.

Let's pretend you are a wealthy aristocrat, seeking to petition the King on a matter of personal importance. King George is in residence at Hampton Court Palace, so that's where you must go. As part of the court circle you are allowed into the palace, but where is the king? You are told he is in the Queen's Royal Apartments, so off you go to seek an audience.
The portal to the royal apartments is the Queen's Guard Chamber. You knock on the door and because of your wealth and status, the Yeoman Guard allow you admittance. You enter a large room, filled with courtiers who all have the same goal, of seeing the king.
Fortunately, you are selected to pass deeper into the apartments and are escorted into the Queen's Presence Chamber. This is another large room, this time lined with impressive portraits, including one of King George in his coronation gown, a strong reminder of his sovereign power.
You have arrived a short time before the king dines in public, and so you are escorted through the Dining Room. The table is set for one person - the King- and the barriers already erected to keep those watching him eat, at a distance from the royal person.
You are ushered through the dining area into the inner Privy Chambers. The room is packed with courtiers dressed in their finest clothes. The decor is spectacular, the paintings on the ceiling and walls designed to emphasise the new king's legitimate claim to the throne, and reinforce his stately power.

However, your petition is of a more personal nature and so you are one of the favoured few who transit into the Drawing Room. This is a more intimate place, where the royal family can relax and play cards, or gamble, with their favourite courtiers.
But today, the King is not in the Drawing Room, but next door in the State Bedchamber. This is where the monarch, whilst he is being ritually dressed, receives visitors and starts the business of the day.
But you are sent beyond the State Bedchamber, into the private rooms and beyond into the Gallery.On wet days, should the King wish to exercise, he can promenade, or play sports, in this long gallery. You catch up with the King here, and he is in a generous mood, and suggests you speak to one of his retinue who can be found in the private chambers.
Your mission continues as you visit the room belonging to the Women of the Queen's Bedchamber,  and pass on into the Queen's Bedchamber itself. Since King George's wife is absent (that's a whole new story) pass through and into her Dressing Room, then into her private Oratory.
Hey ho, the man you needed to speak to is not there, so you are escorted back out into the corridor, and find  you have travelled full circle.
Hey ho! It seems you have had a wasted trip, but at least you saw the sights on the way round.
If you would like to visit the Georgian Chambers at Hampton Court Palace - just click the links.

Next week: Dining: Henry VIII vs George I
Posted by Unknown at 04:40