What’s a ship without a ship’s cat, right? So, of course, my latest Regency WIND RAVEN, a pirate adventure set on a schooner (and other places) in 1817, had to have a cat. And it had to be a special cat.


It probably seems fundamental that a cat could be, and was, a valued member of the crew, particularly for ridding a ship of mice and rats. In addition to cats, sailors in the 18th and 19th centuries kept a plethora of animals as pets, anything they took a fancy to and could buy in any foreign port they happened to visit. No doubt such pets offered the seamen who were away from their homes for long periods a companionship the longed for. Of course, some of these pets ended up dying from lack of their normal diets, but that didn't stop the sailors from bringing them aboard. And there were other problems. Back then, no one spayed or neutered cats so a female cat might produce a litter from a shore leave liaison. Then, too, a shipboard tomcat would be inclined to spray urine, which probably added to the general scent belowdecks. That is one reason the cat in my story is a female! 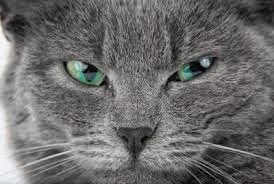 Cats being cats, there were probably ship's cats that were aloof and half-feral, and then there were other ship's cats that were social lap-cats. The cat in WIND RAVEN is somewhere in between. Named “Dutch Sam’ for the English boxer Samuel Elias, who died the year before my story begins, and who was known as having the deadliest fists of any boxer in London, my ship’s cat has two huge white paws (with extra toes, don’t you know!). The crew of the Wind Raven thought it a fitting tribute to name their unusual after the boxer they revered.

Did you know that sailors believed that cats had an influence on the weather? Some believed these cats could start storms through magic stored in their tails. If a ship's cat fell or was thrown overboard, it was thought that it would summon a terrible storm to sink the ship and that if the ship was able to survive, it would be cursed with nine years of bad luck. Other beliefs included: if a cat licked its fur against the grain, it meant a hailstorm was coming; if it sneezed it meant rain; and if it was frisky it meant wind. Some of these beliefs are rooted in reality. Cats are able to detect slight changes in the weather as a result of their very sensitive inner ears, the same characteristic that allows them to land upright when falling. Low atmospheric pressure, a common precursor of stormy weather, often makes cats nervous and restless. 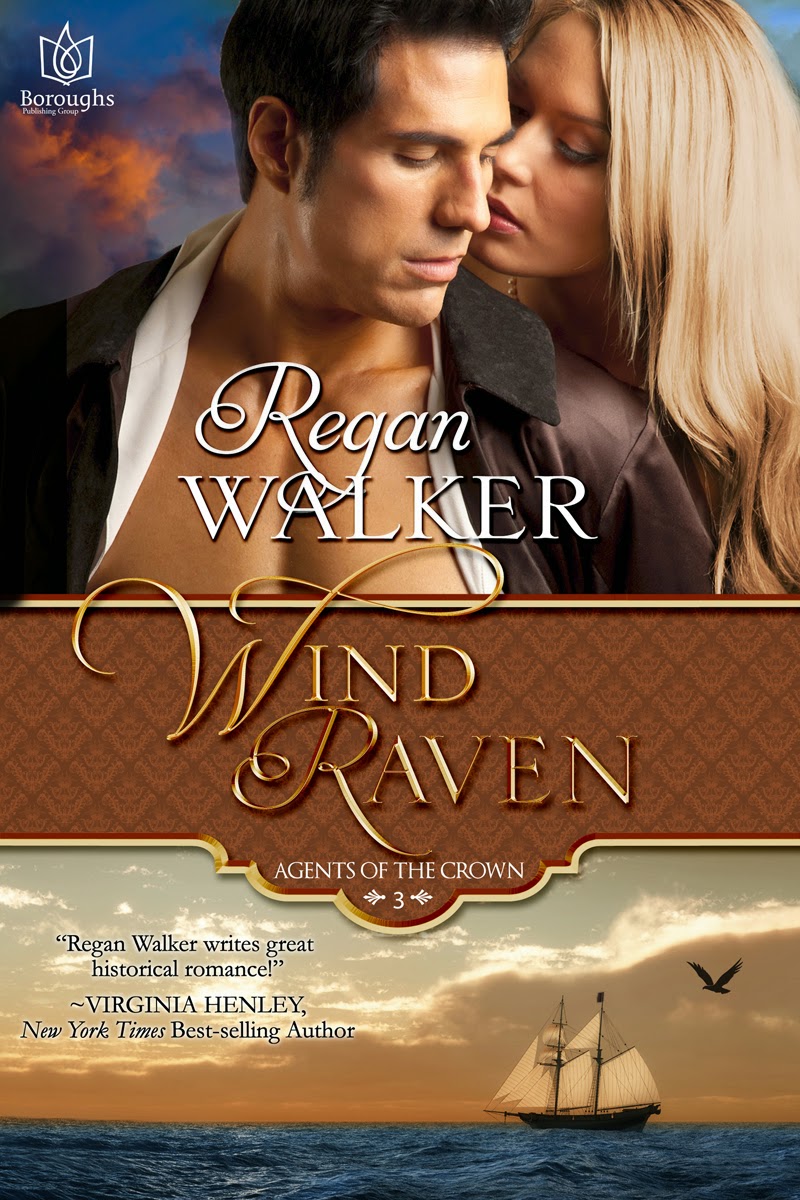 Traditionally the ship's cat was allowed to come and go at will when the ship was in port. If the cat was not aboard when the ship sailed, it might be there the next time the ship was back in port. After all, there are always plenty of rodents and garbage along the waterfront for the cats to survive in between ships. For an independent cat like Dutch Sam, the arrangement was perfect, and she promptly attached herself to the Captain Nicholas Powell, the hero in my story, following him back to his ship when it was in port in St. Thomas. Of course, during the story, her attachment to the heroine grows and she begins to take naps in the heroine’s cabin.

There are many famous ship’s cats, but perhaps my favorite is Blackie and that’s because of the man he impressed enough to set aside the cares of a world war to greet him. A man who impressed me enough to name my son after him. Blackie was the ship’s cat on the HMS Prince of Wales during the Second World War when the ship carried Prime Minister Winston Churchill across the Atlantic to Newfoundland in 1941, where he secretly met with the American President. As Churchill prepared to step off the Prince of Wales, Blackie (obviously recognizing a man worthy of his attention) approached Churchill. And, Churchill (obviously recognizing a discerning cat) stooped to bid the cat farewell. The moment was captured on camera and reported around the world. 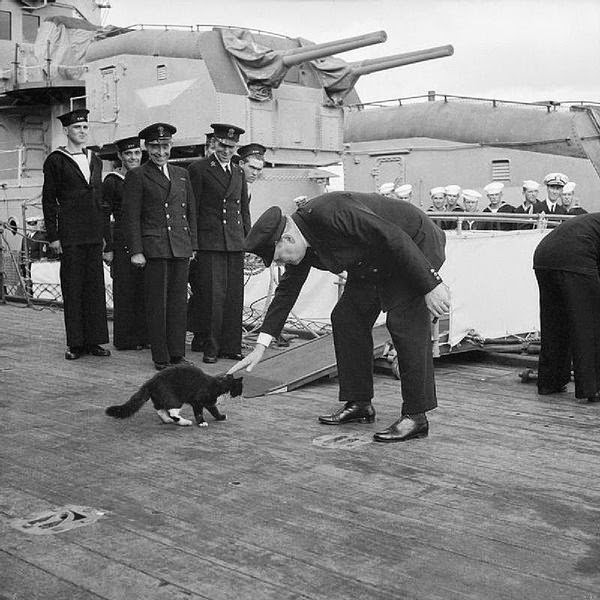 In honor of the encounter, Blackie’s name was changed to “Churchill.’ Churchill was known to love cats and kept a succession of them at Chartwell, his home. His best-known cat during the war years was a big gray cat named “Nelson’ after England’s famous admiral. How wonderful is that?
Ordered by the Prince Regent into the Caribbean, English sea captain and former privateer Jean Nicholas Powell has no time for women onboard the Wind Raven, especially not Tara McConnell. The impudent American forced herself aboard, and so she’ll get more than she bargained for: Instead of a direct sail to Baltimore, she’ll join their quest to investigate a rampaging pirate, the infamous Roberto Cofresi.
But the hoyden thinks she can crew with his men, and though he bans her from the rigging, Nick is captivated watching her lithe, luscious movements on deck. Facing high seas, storms, cutthroats and the endless unknown, he must protect his ship, his passenger, his crew. But on this voyage, with this woman, there is a greater danger: to his heart.

“You wished to speak to me, Captain?” Tara tried to remain calm, but being alone with the man who had kissed her twice was, to say the least, disconcerting. She tried not to look at his bed. He leaned against his desk, crossing one booted foot over the other. The sight of his black hair tousled by the wind and his golden eyes framed by his dark eyebrows scattered her thoughts.

“I want you below decks and in your cabin when the storm hits, Miss McConnell. You might even want to tie yourself to the bed so you’re not tossed to the deck. It’s going to be rough.”

“This isn’t my first storm, Captain.” Surely the man must know by now that she could pull her own weight with the crew.

“Perhaps not, but it’s your first storm aboard my ship, and I’ll not be taking any chances with your safety. Is that clear?”

“Perfectly.” He was staring at her as if he wanted to say something more but then shrugged and pushed away from his desk. A sudden lurch of the ship brought her careening into his chest. He steadied her with his hands on her upper arms and, for a moment, stared into her eyes, then at her lips.

Instead of letting her go, he drew her more tightly against his chest, his golden eyes boring into hers. “I don’t seem to be able to resist you this close, Miss McConnell.” She felt the heat between them as he bent his head and kissed her, a kiss as fierce as the storm she knew was fast approaching. Her body seemed to come alive as his arms held her. His lips lifted from hers.

“I wish I had time to show you more, but right now my ship requires my attention.” He set her away from him and, reaching for a chart from his desk, swept up the rolled document and strode from the cabin as if the ship wasn’t rolling beneath his feet.

Tara gripped the edge of his desk to steady herself, and not just because of the swells that had the ship constantly dipping and lunging. Damn the unmitigated gall of the man! What made him think he could kiss her whenever he wanted? More troublesome still, why had she let him?

You can find out more about Regan and her wonderful books here: