‘A thousand meadows and cornfields are staked at every throw, and as many villages lost as in the earthquake that overwhelmed Herculaneum and Pompeii.’
Horace Walpole.

The Georgian era heralded many changes in society, including the blossoming of leisure activities. It was an era when the aristocracy liked to show off their wealth, to entertain and hold house parties. At the latter, card games were especially popular and the host would set up tables for guests to play faro, quadrille, piquet or whist. But where there was gaming, there were wagers to be made, and money to be won or lost. For those less scrupulous members of society, cheating was one option to get-rich-quick.
Dice were an integral part of many games, and key to cheating. Most of us have heard the expression, ‘loaded dice’, meaning that the dice have been tampered with so as to land a specific way up. Also known as ‘gourds’, these were altered dice were the stock in hand of cardsharps or ‘blacklegs’ (more them in another post.) 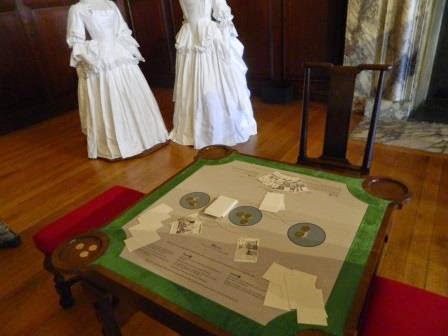 To make a gourd, a die was partially hollowed out and mercury added, so that when thrown, the die favored either low, or high, numbers. Dice that always threw a low number were known as low-fullams, and those high, as high-fullams.  The latter term goes back to Elizabethan times and the London suburb of Fulham, where all the most notorious cardsharps liked to gather.
Another method of cheating was with bristle-dice. These involved making a die with a short, firm bristle in one corner, such that when the die was thrown, it couldn’t settle on that corner and tip over. The technique is described in some detail, but Charles Cotton, in The Complete Gamester (1726)

‘By Bristle-Dice, which are fitted for that purpose, by sticking a hog’s bristle so in the corners, or otherwise in the Dice, that they shall run high or low as they please; this Bristle must be stonrg and short, by which means the Bristle bending, it will not lie of that side, but will be tript over.’