How to Read the Future…Victorian Style

Do you sometimes wonder what the future holds?

My family has recently expanded with the addition of a puggle puppy. As an incurable cat-person, one of the canine qualities I have come to admire most is ‘living in the moment’. Hand on heart and I can say the puppy doesn’t worry about the future, but somehow always manages to find some in the present to make her tail wag.
This has taught me to plan less (especially when I can’t influence events) and make more of now. And when it comes to proving how pointless predicting the future is, I was amused to come across these postcards [1]. Originally they were a set of cigarette cards, devised by French artists around 1900, as their take on what they unimaginably distinct year 2000 would look like.
Many of these images involved flight in one form or another, often with wings attached to people. There are aerial taxis, aerial fire-fighters, airborne torpedo ships, and an early imagining of a jet pack. However, this card showing a flying postman, may not be so far from happening if Amazon get their way with the use of drones to deliver packages. Within the home, the 19th century version of a robot doing housework looks somewhat different from 21st century robotics (and don’t you just love that future imaginings didn’t foresee the end of a maid, especially one in uniform.)

Talking of things domestic, one popular Victorian pastime was diving the future by reading tea-leaves. How exactly did they do this?

Well, the subject drank a cup of tea (made with loose tea leaves) and the cup turned upside down to allow the dregs to drain away. The pattern of the tea leaves at the bottom of the cup was then interpreted. 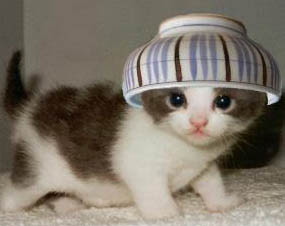 The following was widely agreed upon as the correct interpretation.

Going back to those cigarette cards, it would be interesting to work out what combination of tea leaves would have foretold this version of a combine harvester! 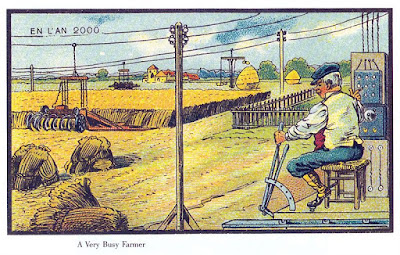