Bayeux Tapestry - a Stitch in Time. 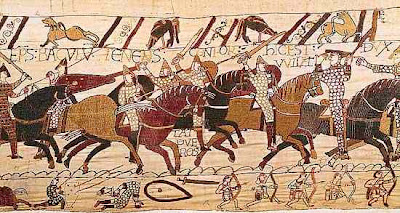 In 1066 the invaded and defeated the English King Harold at the Battle of Hastings. [Actually the battle took place 6 miles away at Santlache or . The winning French punned the name to Sanguelac or … but that’s another story.] King Harold was killed, supposedly with an arrow to his eye, and William the Conqueror seized power….the rest, as they say, is history.

These historic events were commerated in the Bayeux Tapestry and still studied by English primary school children. The official story behind the tapestry is that William’s anxious wife waited at home in , frantically stitching scenes as the latest news of the invasion was brought to her.
The truth, however, is less clear cut.
Made in .
For a start the embroidery style, colours of thread and use of Latin script indicate the work is of English, rather than French, origin. It seems likely that the tapestry was actually commissioned by William’s half brother, Bishop Odo, as a propaganda piece to justify the invasion. 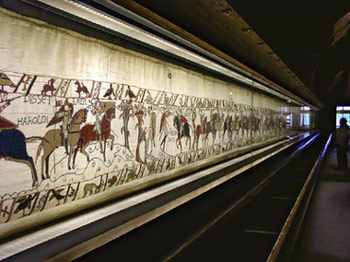 Why ?
It seems the link to the town that gives the tapestry its name is tenuous at best.
In the 18th century the tapestry was found in a storeroom of Bayeux Cathedral. It was not highly prized and used to line an ammunitions wagon - and only saved from ruination when a lawyer offered is bed sheets as an alternative.
The Truth Embroidered.
The most famous panel is titled “King Harold – he is slain”, apparently by an arrow in the eye. However even this is in doubt. Detailed copies by Bernard de Mountfacon in 1729, do not show an arrow, and later scientific studies indicate the arrow was not part of the original stitching.
So why was it added?
The likely explanation is that the French punishment for breaking a word of honour, was having an eye put out and so the arrow was added as a fitting comeuppance.
[Harold swore allegiance to Edward the Confessor, that on Edward’s death he would swear fielty to William as monarch, but he later renaged and made himself King.] 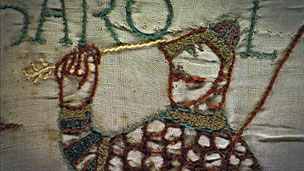 ’s Revenge.
In 1816 Charles Stothard was commissioned by the London Society of Antiquities to make copies of the Bayeux Tapestry. When later, bits were found missing, Charles blamed his wife Anna for cutting pieces of to sell as souvenirs. Further investigation later proved that Charles had lied and he had vandalized the tapestry.
However, his misdeeds had placed him under the curse.
Whilst Charles was painting a replica stained glass window in a church in Yelverton, – he stepped back to admire his handiwork forgetting he was on a scaffold! 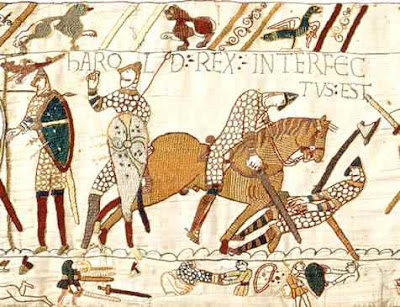