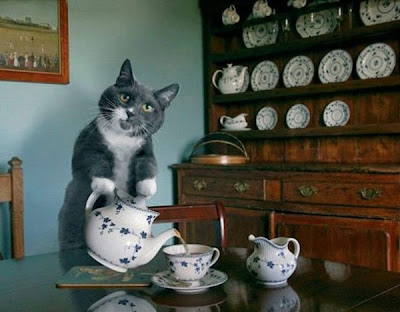 There’s something about a good cup of tea that lubricates thought and helps the day go more smoothly. My parents drink tea by the bucket full, whereas I mainly drink it at work. There are cultural differences to; I believe tea is much less popular in than it is here in the , but strangely the Portuguese and Dutch are big tea drinkers. Anyhow, when tea was first introduced to in the mid 17th century, wild claims about its health benefits ensured its popularity.
In 1657 Thomas Garway, proprietor of a coffee house in Exchange Alley in London claimed tea was “gathered by virgins” and “makes a body active and lusty”. This miracle elixir also; “preserves perfect health until extreme old age”, “vanquishes nightmares” and “dispenses with the need for sleep.”

When the court of Charles II, influenced by his Portuguese wife Catherine of Braganza, started drinking tea its popularity rose to the point of a drop in alcohol consumption amongst the masses. This had the knock on effect of lowering revenue from alcohol sales and so government quickly increased the tax on tea (reaching a peek in the mid 1750’s when it stood at over 100%.)
One concern Charles II had was that tea drinking encouraged small groups to assemble over a brew and increased opportunities for seditious plotting. So in 1675 Charles forbad the sales of tea to private houses. Such was the outrage that he was forced to revoke the law within a week of its issue.

The market to tea was huge and the profits for those importing were immense. The Company recognized this and rapidly monopolized the sea trade with its fleet of tea clippers such as the Cutty Sark. The streamlined, tall masted sailing vessels could reach speeds of nearly 18 knots, which was extraordinary at the time.
But when in the late 1700’s tax made the price of tea prohibitive to many people, there were unscrupulous traders who ‘cut’ tea with sloe leaves, liquorice and even the dried dregs from tea pots. It took action by William Pitt the Younger in 1784 to recognize what was happening and save the quality of the great British cupper. He reduced the tax on tea to 12.5% and a year later brought in the ‘Food and Drug Act’ which promoted harsh penalties for adulterating tea. However it wasn’t until well over a century later in 1879 that someone thought to inspect tea at the site of import to ensure purity.
NEXT POST (Sunday)– The ritual of tea drinking, plus how to brew the perfect cupper.