When the Past Becomes History.

‘Smuggling, though a real offence, is owing to the laws themselves, for the higher the duties, the greater the advantage and consequently the temptation.’
1768 Treatise on Crimes and Punishment, Beccaria. 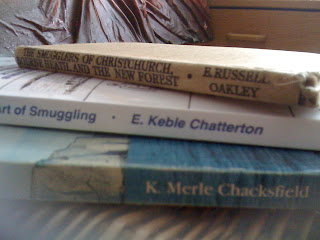 I’m currently researching my WIP (work in progress) about smuggling along the south coast of England in the 18th century, and so imagine my surprise when my husband produced a small beige-coloured book on the subject from our very own bookshelves! The interesting thing is, the more I read, the more I realised this book itself, was a piece of history!
‘The Smugglers of Christchurch, Bourne Heath and the New Forest’, by E Russell Oakley, published in 1924, turned out to be a wonderful glimpse into the history – not just of smuggling, but also of the 1920’s.
In the book Mr Oakley writes about a talk on smuggling he gave on BBC radio, in January 1924. He recounts the true story of a fast sailing boat with a cargo of contraband tea which, in 1748, was chased by Revenue cutters. In danger of being overhauled and captured, the smugglers jumped overboard in shallow water just off Bourne Heath and swam ashore to escape. In his radio broadcast Mr Oakley bemoans:
“It is curious that contemporary records give us so much detail, yet the name of the boat and her home port are not stated.”
And it’s this next bit that I love as a reflection of history-within-history. In his book, Mr Oakley recounts that a week after the program he received a letter which read:
“Last week I purchased a wireless set. [Don’t you just love it? Owning a radio was so unusual the writer mentioned it in his letter!] Last Saturday night I listened in for the first time and you were the first speaker I have heard on the air.”
The letter goes onto say:
“I am going to tell you something you don’t know. That boat belonged to a relative of our family and the loss of it broke his heart and he died soon afterwards. The name of the boat was ‘Charles’ and she was…an oyster dredger and fishing boat.” 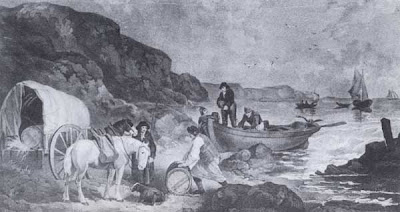 How wonderful, that the new-technology of the ‘wireless set’ provided an answer to a question nearly two centuries old!
Another fascinating glimpse into the past is the mention of what were then hamlets and villages, - Shirley – a hamlet four miles away (now a waste concrete and brick, sprawling suburb of , and anything less idyllic or hamlet-like it’s difficult to imagine.) And of course there is the Bourne Heath of the books title – which it transpires is the forerunner of the well-known seaside resort and popular retirement town of . In Victorian and Edwardian times the transformation from sleepy Bourne Heath, to bustling was underway, as E Russell Oakley writes in 1924:
“Many places in the coastal belt….have entirely disappeared, submerged under a titanic tide of bricks, cement, reinforced concrete and asphalt.”
‘I spent my nineteenth summer on a smuggling coast…The contraband trade was at that time very successful, and it happened to me to fall in with those who carried it on.’