"Sir, the great chair of a full and pleasant town club is, perhaps, the throne of human felicity."

Dr. Johnson on clubs.
In a Georgette Heyer novel, I think it's 'The Grand Sophy' - the heroine decides to throw over convention and take a drive along in her high-perch phaeton. Her relatives were shaken to the core - and the reason for their shock? 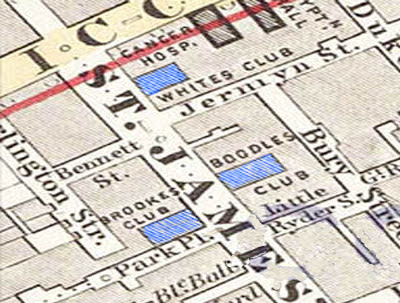 In regency times was a male dominion, the home of gentlemen's clubs and shops of masculine interest where a chap could purchase a new gun, buy his cigars or the latest shaving soap in peace. Can you imagine that in the 21st century - a whole road given over to gentlemen? The temptation was too much for me and with the pluck of a modern day Sophy, I went for a walk along St James's to see what had become, in particular, of the clubs.
In the early 19th century a satirical poem published in the Comic Hand observed how on a gentleman split his time between wife, mistress and his club. In the Regency there were three premier clubs: White's, Boodles and Brooks - all situated on and providing a private escape in which to gamble. Each club had a distinctive atmosphere and catered for slightly different niches, but each boasted comfy chairs, grand interiors and first-rate service.

In Sophy's day, as she turned off Piccadilly the first gentlemen's club she would pass was White's at number 37. Further down, Boodles at number 28, and on the opposite side of the road, , Brooks'.
White's was the most exclusive club, so rarified that it was said that on the birth of  Horace Walpole's son and heir, the new father despatched his butler to put the child's name down for White's, before even registering the birth. However, the down side of White's were the fortunes wagered at the gaming tables, the club known as 'the bane of English nobility' because of reputations and inheritances lost there.


As wrote:
"In less than two hours, the Duke of lost four hundred and fifty pounds at Loo [a card game] Miss Pelham won three hundred and I, the rest. On another occasion, I lost fifty-six guineas before I could say Ave Maria."


It was White's famous bow window that Sophy wanted to see on her drive. The bay was created when the main entrance was moved, and it's view was considered the prime location to see and been seen (even though, according to Beau Brummell's rules, no one sitting in the window should acknowledge a greeting from the street.) Indeed, that arbiter of male fashion, Brummell, adopted the bay as his unofficial state room. When in 1816 gambling debts forced Brummell abroad, Lord Alvanley took the position of honour.  Alvanely reputedly bet 3,000 pounds on which of two raindrops would reach the bottom of the bay window first.

In the modern day a former chairman was Ian Cameron, father to the British Prime Minister, David Cameron.


Sophy then passed Boodles , which was the domain of the country set - fans of hunting, shooting and fishing - and of course, gambling.  The club was originally called 'Savoir Vivre' but was later renamed after the head waiter, Edward Boodle.
In modern times - Ian Fleming, author of the James Bond novels was a member.

Brooks's was the most overtly political club and became the unofficial Whig party headquarters although membership wasn't restricted to politicians. Members included Sir Joshua Reynolds, William Wilberforce and the Prince of Wales. The founder, Brooks, was a wine merchant of whom it was written:


whose speculative skill
In hasty credit and distant bill,
...nursed in clubs, disdain[ed] a vulgar trade,
Exult[ed] to trust, and blush[ed] to be paid


It seems George Selwyn (see White's Club) wasn't a fan since he described Brooks as:
"the completest composition of knave and fool that ever was, to which I may add liar."

My walk along modern St James's left me struggling to imagine the former glory of this road. In Sophy's day, from with her view from a high carriage, it must have been a daunting and spectucular sight, but now the car is king, the building looked sad and a little neglected. However, I can report that walking along past the clubs in no way created a scandal - which is a sign of progress....of sorts.


Man is a social animal - Aristotle.