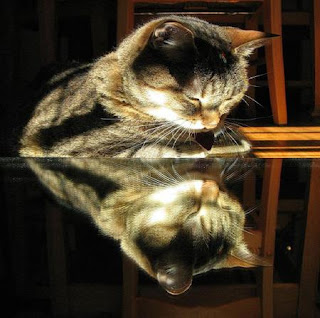 Have you ever wondered where the superstitions concerning bad luck and ladders, and broken mirrors, came from? Well, as I'm on vacation this short post in inspired by one of my holiday reads (Black Cats and Evil Eyes by Chloe Rhodes).


Not Walking Under Ladders
It seems common sense not to walk under a ladder, especially if a painter is balancing a pot of paint at the top - but would you believe this superstition actually goes back to the early church!


When a ladder leans against a wall it forms a triangular shape with the ground. The triangle is held to have sacred properties as it represents the Trinity: God, the Son and the Holy Spirit. To walk under a ladder would break the triangle and thus be irreverent to the Trinity - and by extension sinful.


Another explanation, also involving the soul, was associated with death by hanging. The condemned man would climb a ladder up onto the scaffold. When he had been executed his soul, since it was unfit for heaven, lingered beneath the ladder. Hence, to walk beneath the ladder was to mingle with the souls of the undead.


Superstitions linking bad luck to a broken mirror go back to the Romans and other ancient civilisations. This is largely to do wit the belief that looking at a reflected image meant part of the soul was housed within the mirror. Hence, if the mirror was broken then the soul would also be damaged.


The first written reference to 7 years bad luck was in 1851. This very specific length of time may well be related to the Roman belief that the body renewed itself every 7 years and so hopefully all previous damage would be healed.


Obviously the fear of broken mirrors runs deep because it was mention in John Brand's 18th century publication, Observation on the Popular Antiquities of Great Britain, where he wrote:
"The breaking a Looking Glass is accounted a very unlucky accident. Mirrors were formerly used by magicians in their superstitious and diabolical operations."


Oh well, after all this bad luck, I'd better toss some salt over my shoulder (or does that also bring bad, no good, luck…ho hum)
Posted by Unknown at 12:53