The Great Bed of Ware - by guest Deborah Swift

A 16th century bed to sleep fifty-two
by Deborah Swift. 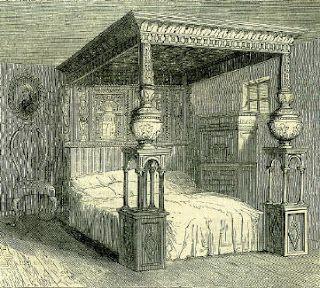 In the 1590’s what better advertising gimmick could you have for your inn or public house than a giant four poster bed that could sleep as many as twenty six people?


The Great Bed of Ware is an extremely large oak bed, made in the realm of Elizabeth I, that was originally housed in the White Hart Inn in . Ware was a popular overnight stop-over for pilgrims on the route from to the shrine at Walsingham, and had many inns by the end of the 16th century.


Billed as able to sleep 12, the fame of the Great Bed of Ware spread so much that travellers often chose the town of to break their journey simply to spend one night in the bed. People who slept there marked the occasion by carving their initials on the bed or adding their red wax seals, which are still visible on the bedposts and headboard today. Apparently 26 butchers and their wives spent the night in it for a bet in 1689, (52 people!) but it was also popular with the rich and famous - in 1596 Prince Ludwig of Anhalf-Kohten visited Ware and slept there, and in 1610 Prince Ludwig Friedrich of Württemburg stayed in it.


The bed is 3.38m long and 3.26m wide (ten by eleven feet), and is carved with acanthus leaves and strapwork patterns derived from the Renaissance tradition. Originally it would have been brightly painted, and traces of the painting can still be seen on the figures on the bed-head. The marquetry panels which are inlaid in the headboard are copies of the work of Dutch artist Hans Vredeman de Vries but the panels were probably carved by craftsmen. The frame of the bed was built by Jonas Fosbrooke from Hertfordshire.


Despite its huge size, the bed travelled about quite a lot. In the 19th century it was situated at the Saracen’s Head, another inn at Ware, but it also had brief stays at The George, The Crown or the Bull.  In 1870, William Henry Teale, the owner of the Rye House, acquired the bed and used it in his pleasure garden as a visitor attraction. In 1931, it was acquired by the Victoria and Albert Museum, in , where it is now one of their most prized exhibits.
The most famous mention of it during the Elizabethan period is in Shakespeare's Twelfth Night of 1601 : Toby Belch  ...and as many lies as will lie in thy sheet of paper, although the sheet were big enough for the bed of Ware in ...'.


Thanks to Grace for hosting me. Now I need to find another 52 historical novelists to sneak into the V&A for a night of bed-time reading so we can break the world record for the number of people in the bed. Any takers?


Deborah is author of The Gilded Lily and The Lady’s Slipper, both on kindle special offer this month

Deborah Swift's captivating writing makes you feel as if you're in Restoration alongside the two lead characters of this excellent historical novel. Highly recommended. --The Bookbag
http://www.amazon.co.uk/The-Gilded-Lily-Deborah-Swift/dp/0330543431/

Thank you Deborah, for such a fascinating post. I remember visiting William Wordsworth's home in the Lake District and seeing his four poster bed. It was surprisingly small (apparently people tended to sleep sitting up (?!) and so the beds were shorter - so the Bed of Ware, must have seemed even more enormous in its day.
Thank you for visiting,
Grace x
Posted by Unknown at 00:30