Between the World Cup and Wimbledon, it seems everyone is talking about, or watching sport this summer. But in previous centuries, it was curiosities that attracted the crowds, sights such as unusual animals or the exotic. Typical of this, in the late 19th century, was George Pidcock and his hugely popular menagerie at the Exeter Exchange.
Mr. Pidcock started out as an itinerant showman, hawking animals around fairs and markets. But the poor roads made it difficult to move the animals in winter and Pidcock needed a base. He bought a four-story building, the Exeter Exchange, in the Strand, London – and made his fortune.
The animals included a rhinoceros, kangaroo, lynx, zebra and rare birds and Pidcock found the public paid handsomely to view his animals, and what started as a temporary solution turned into a permanent display. Such was the success of the venture that he went on to add tigers and an elephant!
The visitor paid a shilling to view the three main exhibits, or two shillings to see everything. The menagerie was open for twelve hours a day from 9 am and the most popular time to visit was feeding time at 8 pm. The later was signaled by Chunee, the elephant, ringing a bell.
"The Lords of Parliament and the lions of Exeter Change all dined at about eight."
William Clarke, journalist.
One famous visitor, Lord Byron, remarked that the hippotamus had the face of the Prime Minister, Lord Liverpool – possibly a dubious anecdote since no record exists of a hippo at Pidcock’s menagerie.
Another major attraction in the 18th – 19th century were performing animals. One such was Munito the ‘learned’ dog. First shown by Signor Castelli in London, 1817, the dog played dominoes, did card tricks and performed arithmetic. Decades later, Charles Dickens recalls, as a boy, seeing Munito.
“About 45 years ago, a learned dog was exhibited in Piccadilly -  Munito … He performed many curious feats, answering questions, telling the hour of the day … picking out any cards called for from a pack on the ground.”
Charles Dickens, 1867
Incidentally, Dickens was determined to work out how Munito did his tricks – which perhaps he did.
“We watched more narrowly … noticed that between each feat the master gave the dog some small bits … of food, and that there was a faint smell of aniseed from that corner of the room.”
Dickens believed that as the owner set out the cards, he pressed his thumb on the chosen card impregnating it with the scent of aniseed which Munito had been trained to recognize.  Apparently, he confronted Signor Castelli after the show, with this explanation, who ‘did not deny the discovery.’

Another late 18th craze was the performing pig trained by Samuel  Bisset. Reputedly he bought the black piglet in Belfast market for 3 shillings, and tutored him for two years before The Learned Pig first made his debut in 1783, Dublin. The pig knelt and bowed, used cardboard letters to spell out names and could point to the married people in the audience. The act succeeded Bisset's wildest dreams and the couple were warmly welcome in novelty seeking London.
"…solves questions in the four rules of arithmetic, tells by looking at a …watch, what is the hour and minute and is the admiration of all who have seen him."
"…the tongue of the most florid orator…can sufficiently describe the wonderful performance of that sagacious animal." 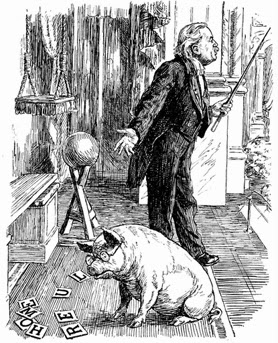 So convincing was the pig's performance that some religious people claimed he was possessed and 'corresponding with the devil'. Others saw it as proof that the soul could migrate suspecting that: 'The spirit of the grunting Philosopher might once have animated a man.'
The act amazed the audience as the pig spelt names out with cardboard letters. Crowds flocked to see him and with four shows a day, was rumored to take the huge amount of 70 pounds a week in ticket sales.
After a long run the pig joined a circus performing at Sadler's Wells Theatre. A group of acrobats, incensed at being asked to share a billing with a performing pig, threatened to resign and were sacked on the spot. By 1786, in the world of entertainment the Learned Pig ruled.
"A far greater object of admiration to the English nation than ever was Sir Isaac Newton." Robert Southey