DEATH ON THE WALLS - Poison in Victorian Britain 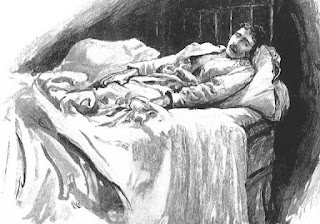 Wallpaper as a murder weapon? Poisoned in your sleep? This week's post recounts how a fashion for green could kill!
“A great deal of slow poisoning is going on in .”
Dr William Hinds 1857
In the 1850’s oil lamps, with their brighter light, replaced candles as the main source of household illumination, and so walls no longer needed to be pale reflective colours. Dark shades became fashionable and of these, there was a passion for Scheele’s Green and Schweinfurt Green. Anyone who was 'on trende' had to have a ‘green room,’ and manufacturers estimated that in 1858 there were an estimated 100 million squares miles of green wallpaper in Britain alone. Unfortunately, what people failed to realize was that their prized wallpaper was coloured with arsenic, and very likely poisoning them.
There first hint of trouble was recorded in the Limehouse district of London, in 1862. First one child, then a second, and tragically a third, died with symptoms similar to diphtheria. However an inspection of their home by the Medical Health Officer was of another opinion – he noted the green wallpaper in the children’s bedroom. After tests it became clear that the painful, constricted throats that ailed the children were not due to diphtheria, but arsenic found in the Scheele’s green wallpaper.
A correspondence on the subject of arsenical wallpapers took place in The Times newspaper. One respondent, signing himself ‘A. Sufferer’ wrote that when he told his decorator that he was distributing poison, the man:


“…denied the possibility of ill resulting and offered to eat a pound of paper.”


However the paper manufacturers had a lot to lose, and with much the same attitude as tobacco manufacturers’ in the 1960’s, decided to deny the evidence, saying things such as:


Their defence was that good quality wallpapers didn’t shed arsenical dust and so couldn’t be poisoning people. It took until the 1890’s for science to show that arsenical vapour (not just solid arsenic) was deadly.
To make matters worse, the Victorian remedy for illness was to be confined to a room and avoid cold air. This meant that people suffering with headaches, fatigue, chest complaints and nauseau (all symptoms of arsenical poisoning) were likely to take to their beds in a green bedroom with the windows tight shut against draughts and thus :


“Breath air loaded with the breathe of death.”
As stories spread people became more suspicious of that their décor was making them ill. When one lady sickened, and her pet cat’s fur fell out, she swapped rooms with her maid and she made a full recovery…whilst the maid took sick. It didn’t take long for infamous green wallpaper to appear in fiction…as a murder weapon.

In ‘Chambers Journal of Popular Literature, Science and Arts’ a story was published about the orphan, Sir Frederick Staunton. Now Freddie’s guardian, his Uncle, wished the boy harm so that he could inherit, and sent his ward to stay with the local vicar. His instructions were to give the boy the best room in the house, a room decorated with a wallpaper of a:  “..rich, deep, emerald hue.”  Apparently the room was cursed by a monk in the time of Henry VIII,


“Several deaths had occurred in the green chamber in particular, for the most part blooming girls who had faded and pined under ‘the curse’ until their dim eyes had looked their last at the emerald-tinted walls.”


Fortunately for a sickening Freddie, a visiting physician spotted the true cause of the boy’s ill health and all ended happily.
Unhappily, arsenic wasn’t just present in green wallpaper, but also in blue, pink, yellow, brown, gray and white. In 1870’s America, the Michigan Board of Health assembled books of samples of arsenical wallpaper, called ‘Shadows from the Walls of Death’ to be circulated to every state library and increase awareness of this silent danger.
Even so, it Queen was seemingly unaware of the danger when in 1879 she abraided a guest for being late for his audience. His defence was that he had slept poorly because of the green wallpaper in his bedroom. Astonished to learn of the dangers of arsenical papers the Queen had every bit of wallpaper stripped out of .


Not everyone was so easily convinced. The famous artist and designer, William Morris,  only removed green arsenic pigments from his wallpapers under protest, writing in 1885:


“….it is hardly possible to imagine….a greater folly…than the arsenic scare.”


Eventually in the 1870’s it was public fear of poisoning that saw the decline in fashion for green. Some manufacturers’ tried to forestall this by printing ‘Free From Arsenic’ on the back of their papers. This backfired since when tests were run on these ‘arsenic free’ papers, they were found to contain very high levels indeed. Public confidence never recovered and green walls went out of fashion!